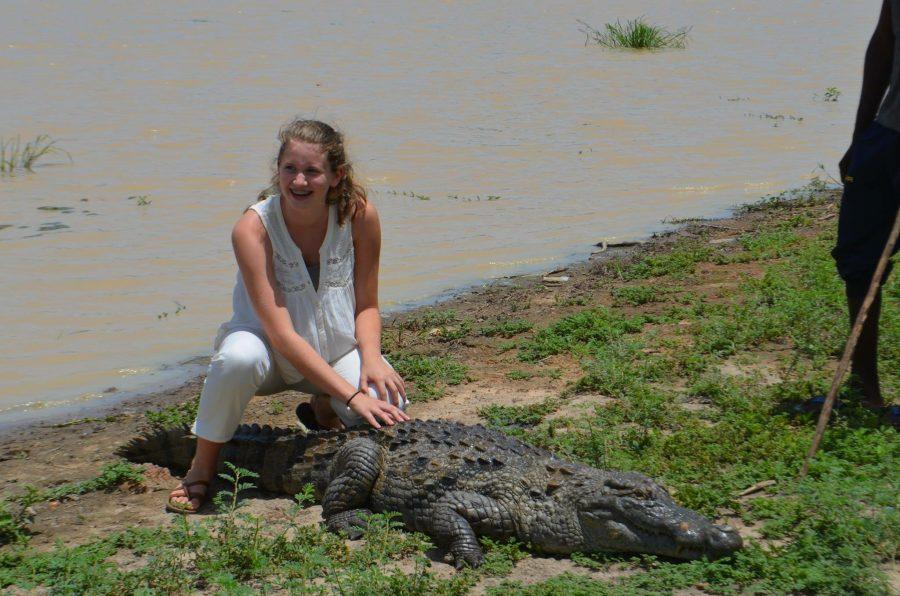 A world away, not worlds apart

Tired of the same old summer routine and family vacations, Ayston Scully got her shots, filled her malaria prescription and bought a plane ticket to Burkina Faso in the hopes of having an independent adventure. expectations aside, Scully experienced three weeks of humbling African culture.

Below is the full transcribed interview from Cynthia Young, the wife of Deputy Chief of Mission in Ouagadougou, Burkina Faso. Young is also Scully’s aunt and was responsible for  hosted Ayston during her three week trip. Check out the full story in the October issue of Carpe Diem

Tell me what it was like hosting Ayston for three weeks

It was brilliant hosting our beautiful and sweet niece Ayston for three weeks! I wish she could have stayed all summer. We also wish she would come live with us and graduate from high school at the International School of Ouagadougou! Ayston told me that she wanted to come here for the opportunity to learn about and experience a different culture and country, to see what it is like to travel to a distant place, and to meet people she never would have met otherwise. I was so proud of her for wanting to see something of the world outside of what is familiar, and to want to learn about life in a part of the world where things like running water and electricity are a luxury for the very few. Her attitude was so positive and enthusiastic. She wanted to see and do as much as possible and was so friendly and outgoing to all the people she encountered. Everyone was so happy to meet her; women and little children in the fruit and vegetable market, university students learning English that she volunteered to do conversation with, girls singing in a choir where she volunteered to sing and participate, young children who she volunteered to work with making bracelets, women in a home for young cast-out mothers where she volunteered….all of them loved meeting Ayston. Hosting a guest like Ayston, someone so interested in the place she was visiting and who wanted to get involved, was a real pleasure.

What is your husband’s role at the American embassy?My husband, David Young, is the Deputy Chief of Mission at the US Embassy in Ouagadougou. The Deputy Chief of Mission is called the DCM for short. Here, where they speak French, he is called “Monsieur Le DCM“! Often they even call him “Son Excellence” – which means “Your Excellency”! I tease him about that – it’s not everyday that you get to be called Your Excellency! “Monsieur Le DCM” is the Deputy to the Ambassador here. That means second in command. The DCM works for the Ambassador, carries out the Ambassador’s mandate, and overseas all the nuts-and-bolts operations. (Kind of like being the Chief Operating Officer – COO- of a company in the US, while the Ambassador is more like the Chief Executive Officer – CEO.) There are over 400 employees here, including Americans and locally-employed Burkinabey staff. (Burkinabey is the word used to describe people from Burkina Faso.) It’s a big job. The US Embassy does so many things here, it’s amazing! Diplomacy with Burkina Faso includes millions of dollars of aid and so many programs (farming and food, roads, infrastructure, good governance and promoting democracy, national security and the police, healthcare, disease prevention, climate change and environmental projects, programs to help entrepreneurs, encouraging investment by US businesses, education programs for teachers, a big Peace Corps program, and more!)  it is the Embassy’s job to carry out and manage all of these programs. Also, there are Foreign Service Officers here building relations with local people in government, civil society, religious groups, the arts, basically everything…building connections and ties in all these areas so that we know what is happening in Burkina Faso, so that our government knows how Burkina Faso is doing. When Burkina Faso is safe and secure, has democracy, has jobs and a good economy, has decent schools, has food to buy, good health care and hospitals, then that’s good for America too! Ebola is a good example. People in America may wonder – why should we care about a little place we’ve never heard of? The answer is that we all inhabit planet earth and what affects Burkina Faso will eventually affect America too. So, that is why the US Embassy is here, and that is why we live here and are doing all this stuff. It’s a challenging and busy job being DCM.

How is the culture in Burkina Faso different than places you’ve lived in America?The Culture in West Africa is completely different from America! For starters, the language is different: Burkina Faso is a French-speaking country, but French is not the original language for anyone. The number of original local African languages is over 60. The most widely-used local African languages are Mooray, Djoula, Fulfulday, Gwamu, Bisa and Lobi, (I love the sound of those languages!) but there are many others too. So, when the French people colonized West Africa – around 1895 – they decided to make French a national language so that everyone could communicate. But in rural villages where not everyone goes to school, you can meet people who don’t speak French at all – only their local language. It is fun and challenging to live in a country where no one speaks English!

There are more Muslims here than in America, so the religious culture is different too. There are mosques in every neighborhood and we can hear the call to prayer several times a day throughout the city – even from our garden. About 60% of the people are Muslim. But there are also many Christians too and lots of churches. What’s nice is that there is complete freedom of religion here

and what religion you choose is not a big deal  – many families have people in them of different religions. Muslims marry Christians and no one seems to mind. And, there aren’t particular Muslim parts of town…everyone is all mixed in together and churches stand right next to mosques in the neighborhoods.

Music is different – traditional African music is still very popular here, and when you go out in the evening to hear jazz and pop music,  there are always traditional instruments on stage along with the guitars. There are djembes (african drums) and koras (african string instrument) and balafons (like xylophones) playing along with the modern instruments. This music is really  beautiful and unique – I call it African fusion. I’m not sure if that’s an official name for it, but I think it describes it pretty well.

Clothing is different – the bright African fabrics are just gorgeous and really stand out against the brown-orange street-scape – things look pretty brown here because we are in the Sahel – just below the Sahara desert – so it is dry and dusty. So, the bright colors really show up and look beautiful. Men also have special embroidered tunics they wear called Dafani. Did you know that the Burkina Faso Olympic team won “BEST DRESSED” at the opening ceremonies this year? Even though they only had about 5 competitors, they turned out in style in their traditional Dafani and won best-dressed from among all the nations!

The dancing here is different – based on traditional dancing done at mask-dance ceremonies in the villages. We’ve been to a mask festival here, and the dancing and costumes were amazing. I’ll attach a picture for you!

So…language, religion, music, clothing, dancing….I could go on but I think that’s enough for now!

How do you think Ayston changed after her stay with you?

I think she probably has a new appreciation for things that we take for granted in America; big grocery stores, Target and Chipotle, stop-lights, good public schools, clean streets, green fields, light switches, and faucets which pour out safe drinking water! I think she also discovered how valuable it can be to learn other languages if you want to connect with people of other countries. And, I think she might have gotten the travel bug. Maybe she will look for travel opportunities in the future, or even consider being a Peace Corps Volunteer!

How is your life in Burkina Faso different than the locals there?

We are lucky to have a nice home with air-conditioning, electricity and running water. We also have a back-up generator, so when the power goes out (which is often) it really doesn’t affect us. The few people here who do have electricity do not have generators, so, even people who are supposed to have electricity are often without it. We have a spacious and beautiful garden, which is a rare thing in this city. We also have a gardener, a house-keeper and a cook. Other expatriates have some of these things, but not local people. We drive a car, which is a rare luxury for most local people. Most people here drive motos (little tiny motor-cycles) and many ride bicycles. Usually, there is one moto or one bicycle per family – so the whole family gets on, little kids clinging to older siblings, who are clinging to parents, and usually squeezed in the middle of all this is a  baby tied on with a scarf…everybody on one moto heading out for the day. In the evening, heading home, they will pick up a chicken for dinner, and that gets flung over the handle-bars. So, the idea of me driving my mini-SUV around town all by myself, with plenty of seats to spare and air-conditioning, seems other-worldly to them. Another big difference, that I think about a lot, is if things go south….say, another coup or an outbreak of ebola….I can get on a plane and head home. But for them, this is home and they have to make it work.