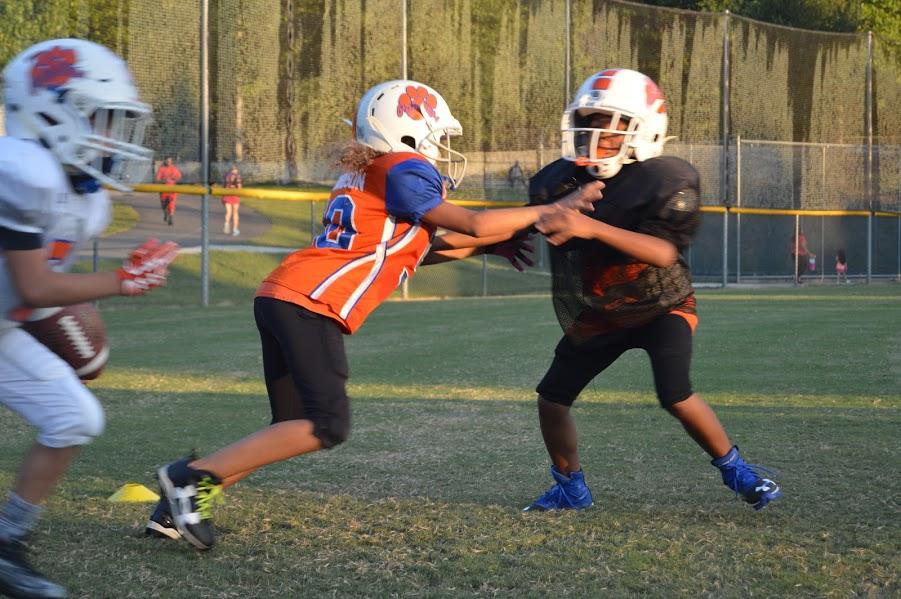 Playing ball with the boys 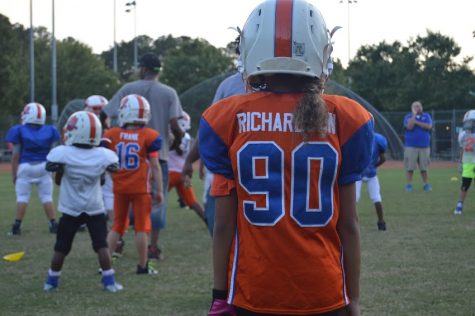 The referee blows the whistle as the kicker kicks the ball off. The air blows her hair wildly around her as she sprints down the field. When she collides with the ball carrier, nine-year-old Gianna Richardson has just accomplished something that most girls never get the opportunity to do.

All the way in the Gwinnett Football League’s Mountain Park, near Parkview High School, Richardson made headlines when she became the first girl in the park’s history to play football.

The head coach of the team, Marcel Baker, enjoys the attention having a girl on the team brings.

“Since a lot of people in this area know about [Richardson] or have at least heard of her, people want to come and see her play,” Baker said. “It makes for a great experience for us and the kids.”

At one point in Gresham Park, Baker coached two sisters at the same time.

“Their names were Tiffany and Tanisha,” Baker said. “They do resemble Gianna a little bit because all three of them have a strong love of the game, and they are willing to work hard each and every day.”

The team practices three days a week. Richardson shows up to every practice “ready to play,” Baker said.

Richardson’s mother, Beth Richardson, was as surprised by Gianna’s aspiration to play football as the rest of the family.

A three-time varsity soccer letter winner, Beth hoped that her daughter would have an inclination towards the same sport.

“I never thought Gianna was ever really that big on football,” she said, “but after we went to a football game a few years back, Gianna just begged for me to let her play, and I let her.”

For Richardson, taking part in the game has already helped her enjoy it more than she ever thought it would.

“I didn’t think I would like it this much,” Richardson said. “The season has been really fun so far, and I’m not ready for it to end.”

Richardson hasn’t just created a buzz around the city for playing. She also reignited the controversy surrounding girls and football.

Athletic director Carter Wilson says girls are allowed and should not be denied the opportunity.

“Girls may participate on boys’ teams when there is no girls’ team offered in that sport by the school,” he said.

“For our team [Gianna] is just another player, so I don’t see how it wouldn’t be the same for other teams,” Campbell said. “If she can do it, I think older girls can do it, too.”

Decatur head coach Scott Jackson believes that girls should have the opportunity to play a male sport, albeit with reservations.

“If girls can make a team, I think that they should be able to do a pretty good job,” Jackson said. “I wouldn’t want a flood of girls, you know. Just from my experiences, it’s a little too physical sometimes for them.”

The Georgia High School Association (GHSA) Associate Director, Carror Wright, thinks that the question extends beyond whether or not girls should be allowed.

“I don’t think it’s about whether they can play or not,” Wright said. “It’s more about how they’re accepted into the sport by their teammates, the coaches and the parents.”

In 2013, twelve-year-old Maddie Baxter played for the Strong Rock Christian School football team. At the school, the community encouraged Maddie Baxter’s withdrawal from the team.

“Frankly, I don’t think Georgia as a whole does a good job with handling a negative situation when it comes to girls playing on a boys team,” Wright said.

Despite the controversy, Richardson wants to return for a second year.

“I’m having fun playing the game that I like,” Richardson said, “so I think that as long I keep liking it, I will be back for next season.”

Beth Richardson has a slightly different opinion. She suspects that most people are just missing the point.

“It’s not about whether or not girls are allowed to play,” Richardson said. “It’s about giving them the opportunity to have fun playing the game that they love and no one should ever be able to take that away from you, boy or girl.”

Do  you think that girls should play football? Give your opinion