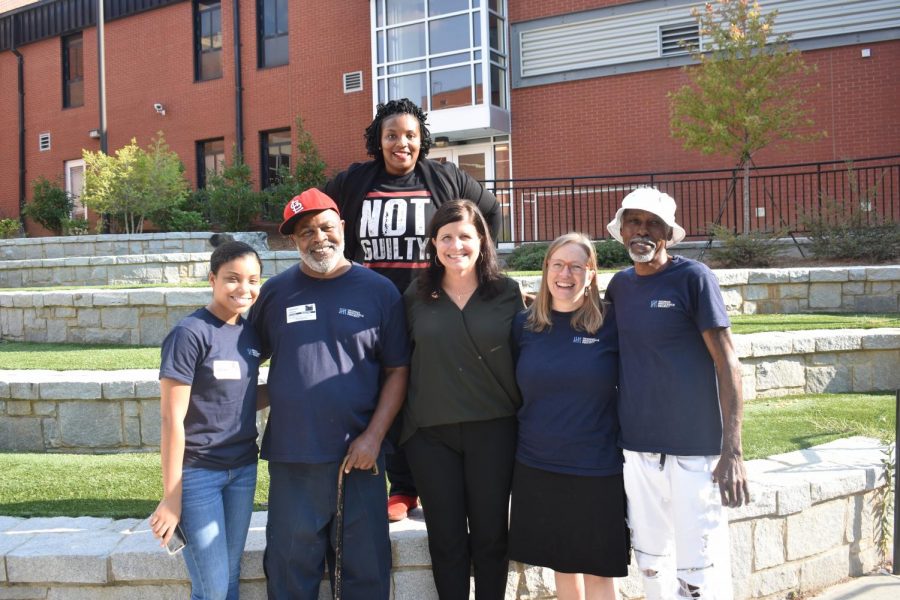 Oct. 2 was Wrongful Conviction Day, a holiday dedicated to those who were falsely accused and convicted of a crime they did not commit. In order to raise awareness, Decatur High School (DHS) and the Georgia Innocence Project (GIP), a non-profit organization working to exonerate the wrongfully convicted in Georgia, teamed up so that students could hear the stories of some of those wrongfully convicted.

Two speakers shared their stories with sophomores, juniors and seniors about going to prison for a crime they did not commit and how the GIP helped exonerate them.

John White was the first to speak. In White’s hometown, Meriwether County, Georgia, a 74-year-old woman was raped and beaten in her Manchester, Georgia home at 4 a.m. According to the GIP, the woman’s beating was so severe that her face was left partially paralyzed.

A composite sketch of the suspect was drawn after the victim gave a description. A rape kit could not be obtained due to the extent of her injuries, although the Georgia Bureau of Investigation (GBI) did find pubic hairs from the crime scene.

During the trial, the prosecution’s lab analyst testified that the pubic hairs found at the crime scene were “similar enough” to match White’s.

White was 19 years old when he was identified as a suspect by the GBI. Five weeks after the crime was committed, White was taken to a lineup, where he was picked by the victim. According to the GIP and White himself, the victim was “almost positive” that White was the rapist.

In September 1979, White was arrested and charged with rape and burglary. He was sentenced to life in prison.

Life in prison caused White to miss out on all the lessons young adults have yet to learn.

“Your day is so synchronized. We were basically living off a schedule every single day where we weren’t given the opportunity to take on responsibility, and it [still] affects me [today]. I’m still [learning] things that a 17-year-old [would have] just ran into,” White said.

White maintained his plea that he was innocent and had absolutely nothing to do with the crime. So, he reached out to the GIP, which got the GBI to perform a DNA test proving John was innocent.

White was able to win compensation for his wrongful conviction. Still, White said the money was not nearly enough.

“It messed my life up. It gave me [the] awareness that the state of Georgia does not care… It just changed everything. I might’ve become a millionaire, I don’t know. Now, I’m struggling,” White said.

Clarence Harrison, the first GIP exoneree and a former DHS student, went to prison for 18 years after being accused of and charged with rape, robbery and kidnapping.

In 1986 in Decatur, Georgia, a woman was attacked and raped repeatedly after being dragged away from a bus stop. The offender also stole her watch.

Decatur Police’s attention was shifted towards Harrison after they had heard that someone was attempting to sell a watch at his home. After searching his home, a watch was never found. However, the police showed Harrison’s photo to the victim, and she identified him as her attacker.

According to the GIP website, the state DNA expert’s testimony was faulty as “the victim’s particular blood group markers had the potential to ‘mask’ the perpetrator’s [markers], meaning that 100% of the male population could be included as possible sources.”

While in prison, Harrison was constantly searching for a way to prove his innocence. In the 1990s, Harrison was told that the evidence in his case was destroyed. This turned out to be false, and the GIP was able to find two slides from the victim’s rape kit. They were able to prove that the DNA in the rape kit was not Harrison’s. Harrison was released from prison on Aug. 31, 2004, and has been speaking to high school students, law students and others all over Georgia.

Both White and Harrison have dedicated themselves to the GIP to not only bring awareness to the wrongfully convicted and the Georgia criminal justice system but to deter anyone from getting in trouble with the law. Both men had been in trouble with the law before their wrongful conviction, which they said was part of the reason they were flagged by the police.

“My main thing is that I appreciate the organization for what they did and for helping me get out, to the point where I feel obligated to help out. I feel like the organization and the people outside of it are trying to right the wrongs of the criminal justice system,” White said.

“These [Georgia Innocence Project] interns put in their effort and so I wanted to put my effort in there hoping that one day I’ll be able to bring someone out of there. I don’t want it to just stop with me. I want others to come out… I wanted to be a part of the Innocence Project, keep the movement going, make people aware of this. And hopefully, some of the things that caused me to be in prison [helped people change so no one goes into there also],” Harrison said.

Read more about White and Harrison’s stories on the GIP’s website.