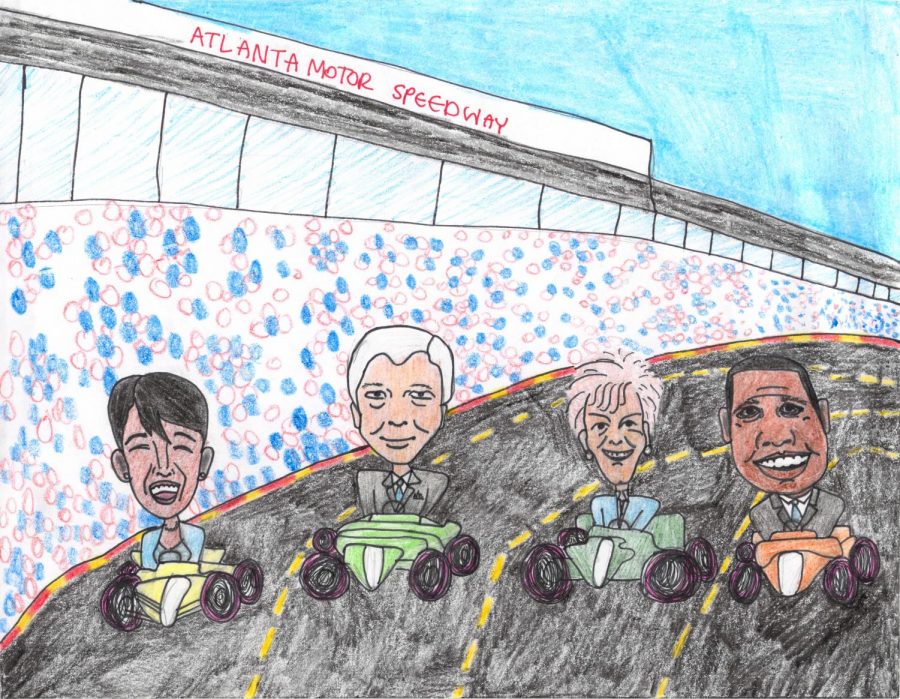 When this story was published, the top four candidates for the election were Mary Norwood, Keisha Lance-Bottoms, Peter Aman and Ceasar Mitchell. However Caesar Mitchell is currently in 6th place, replaced by Cathy Woolard and Vincent Fort.

The race to replace Reed

Over a year of contentious campaigning is drawing to close as candidates have put up signs, met with voters and debated each other to win the votes of Atlanta’s citizens.

On this off-year for national elections, Atlantans will head to the polls to elect the city’s next mayor from a pool of 10.  However, with the current polls, it looks like Atlantans will have to vote twice.

If no candidate receives over 50 percent of the votes on Nov. 7, the two highest-ranked candidates will participate in a head-to-head runoff election on Dec. 5. This will most likely occur, as no candidate is currently polling over 30 percent.

City Council member Mary Norwood, who is not affiliated with a major political party, seems sure to make the second round of voting. She lost by only 700 votes in the 2009 runoff to now-mayor Kasim Reed and has 22 percent of the votes. The real question is who Norwood will oppose in the December runoff.

Incumbent councilmembers Keisha Lance Bottoms and Ceasar Mitchell have been neck-and-neck most of the campaign while Peter Aman, Atlanta’s Chief Operating Officer, has recently made a huge jump in poll numbers and is now challenging for the number two spot currently held by Bottoms.

However, Mitchell recently dropped in the polls behind City Council member Cathy Woolard and Senator Vincent Fort. He dropped from 10.4 percent to 5.8 percent of votes.

As of mid-September, a full 20 percent of voters had not picked their candidate. Whoever wins will almost certainly be in office for two terms (eight years total) and have a large influence over the development of Atlanta’s infrastructure and housing and parks, as well as the economic future of the southeast.

Atlanta is a progressive city, especially concerning race. Because of this, candidates’ positions on these issues aren’t nearly as opposed as we are used to seeing in statewide and national elections.

Similar ideas have been presented by many candidates. However, the major contenders for runoff spots have separated themselves with differing approaches to the issues.

Here’s a look at where the candidates stand on the major issues.

Mary Norwood is running on a platform for green space conservation and sustainable energy. She promises to promote public transportation by creating new bus routes and bike lanes. She wants to help victims of human trafficking, as well as fund middle-class housing, increase police wages and prevent incarceration of nonviolent offenders.

Keisha Lance Bottoms wants to run a transparent government. She pledges to increase public safety, provide education for Atlantan children and improve public transportation.  She is currently second in the race, 3 percent behind Mary Norwood.

Peter Aman wants to improve relations between Atlanta youth and the police. He supports philanthropic foundations that protect the housing of current Atlanta residents. Aman wants to increase businesses owned by women and minorities, reduce income inequality and homelessness in the city and provide better resources for students.

Cathy Woolard, currently in fourth place at 6.3 percent, is the first female president of the city council and the first openly gay elected official in Georgia. She helped to pass a civil rights bill and was an early promoter of the Beltline. She wants to promote affordable housing and increase the police force.

State senator Vincent Fort endorsed Bernie Sanders on the presidential campaign and in turn, Sanders endorsed him for mayor. Fort advocates for a $15 minimum wage, three meals a day for students and two years of free college tuition for kids in Atlanta. Fort also wants to decriminalize marijuana, demilitarize police, and fight the HIV/AIDS crisis in Atlanta.

Ceasar Mitchell has been in fourth place for the majority of the race, but Woolard recently overtook him.  Mitchell pledges to support the ethics board, improve public transportation and provide 21st-century skills training for students. He wants to raise penalties for selling illegal drugs, end the wage gap and help small businesses by promoting Back-To-Business programs.

Kwanza Hall, a sponsor of the “ban-the-box” bill, wants to provide security and body cameras to the police department, preserve affordable housing and promote organizations such as First Step Staffing to hire homeless Atlantans.

John Eaves plans to wage a “war on homelessness” in Atlanta, as well as protect children in need and middle class and senior citizens. Eaves wants to increase the efficiency of emergency response departments, raise police wages and provide officers with body cameras.

Laban King, founder of an organization that promotes minority-owned businesses, believes that views in the center of the political spectrum will allow for progress to be made in Atlanta.