Creating their own labels

In the crowded halls of Decatur, students sport the newest Adidas shoes, designer jeans and Polo Shirts. The labels on junior Devon Elliott though, don’t display name brands from outlet malls or boutiques. They are all created by him

Elliott is a part of a wider group of Decatur students who engineer their own clothing brands. Former student Bella Savignano is a part this unique group.

“I have a hard time finding things that I like wearing in normal stores, and I figured the only way to get around that is to make things myself,” Savignano said.

Her interest in fashion started at a young age. Most 3-year-olds aren’t concerned with matching patterns or colors, but Savignano was different.

Now, when she gets an fashion idea, she turns to her sketch book.

“I’ll listen to something or I’ll see something and it inspires me, and I draw it,” Savignano said.

Her sketches are etched in pencil, then thin pen, and finally filled in with thick markers.

While Savignano turns those designs into pieces of clothing, Loggins looks outside of the typical designer stores and into consignment and thrift shops.

“It’s really fun to find weird things that you wouldn’t find anywhere else,” she said. “That spiraled into me trying to create my own style and design.”

Loggins draws her ideas, but she’s still working on making them a reality. Her sophomore project was to sew one of her designs and create an article of clothing. But her other designs “are a little more complicated then I think I have the skill to make yet,” she said.

For Loggins, sewing is not yet an essential part of the process, but it is for Savignano and others.

Savignano received her first sewing machine when she was six, but Elliott began sewing much later.

In ninth grade, Elliott taught himself to sew after seeing the work of fashion designer Brick Owens.

“When I first started sewing, I didn’t take lessons… I learned through making a mistake.”

That mistake is now the staple of his clothing brand. 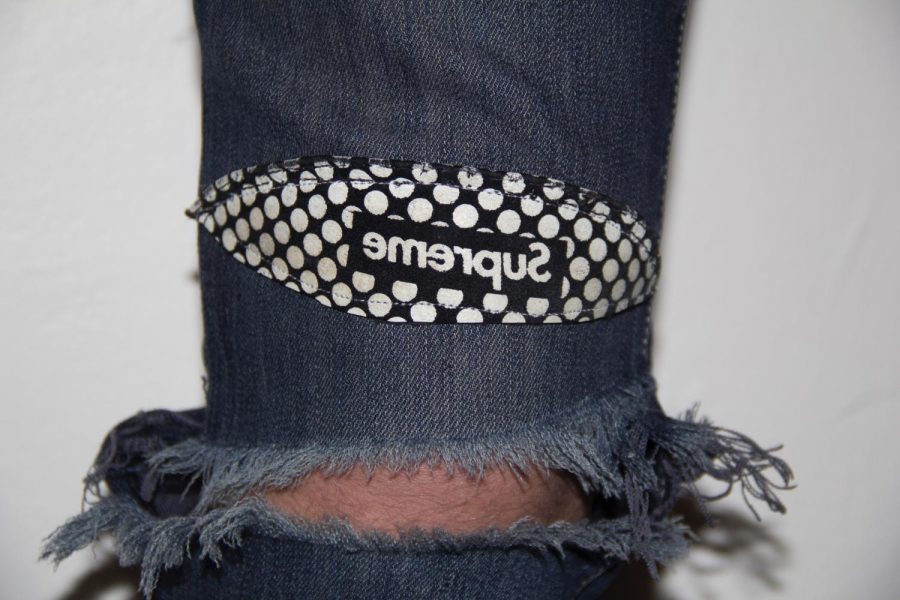 He calls it the heartbeat stitch. Even the name of his brand, Cormeum, is the latin translation of heartbeat.

According to Elliott, other designers have used a similar stitch, but his way allows for more versatility as well as speed.

He predominantly designs jeans which usually feature the stitch, patches or paint. The heartbeat stitch is on all of them, usually pulsing up the seams or across the legs.

“[My designs are] not really a pair of jeans,” Elliott said. “It’s a piece of art.

For Elliott, the significance of clothes goes beyond trends. The symbolic representation of the fabric, threads and color can show emotion, or make a statement.

“I like to do white on red because it represents violence,” Elliott said. “White is a plain color but the red is so vibrant and it brings out the idea of all the suffering a war that’s going around.”

Eliot’s symbolism extends further than color choices, though. Hidden in the denim fabric, he adds political messages that allow him to keep in mind  “what is going on the world.”

The first pair of jeans he ever made originally said “f- Trump” as a political statement but he changed it to “f- Cormeum” to reflect the resilience of his brand.

“You can try to put me down,” Elliott said, “but I’ll always be able to overcome that.”

While Loggins doesn’t draw inspiration from current events like Elliott, she does tries to think outside the box when designing.

One of the methods Loggins uses is word association. She asks a friend for a word, and then designs something the she feels reflects it. One word she was given was lemonade. “With lemonade I don’t just think of a glass of lemonade,” she said. “I think about what kind of feelings [lemonade] inspires.”.

Both Elliott and Loggins look at the world around them for inspiration, but Savignano looks into the fashion-filled past.

“I draw a lot of inspiration from vintage,” Savignano said. “I look at my mom’s old pictures from when she was a kid in the 70s and 80s.”

She also tries to include french influence in her work. The fall and winter clothing line she’s currently designing draws heavily on the film “Moonrise Kingdom” and the “mustard yellow and deep green” featured in it.

Elliot finds he does his best work is when he’s inspired by the designs of others. He is part of a group made up of students from other schools around Atlanta called “777.” They build on each other’s ideas, and “it just creates something bigger and bigger.”

Elliot thinks this collaboration is part of what makes the clothing design business so special.

Loggins agrees. Last summer, she went to a fashion camp at the University of Georgia.

“You would expect it to be kind of judgemental and a little petty, but it really wasn’t,” she said.  “They were the nicest girls I’d ever met in my life.”

“You have to have an incredible amount of talent to just make it past owning a boutique or selling stuff online,” she said.

This competitiveness is evident to Savignano.

“The fashion industry is probably one of the hardest industries to break into,” Savignano said. “A lot of the people in it now had a lot of connections or a lot of money.”

Savignano is trying to get a head start by devoting more of her time to the arts. This year, she is continuing her high school education online, instead of coming back to Decatur as a Sophomore.

“By cutting my school time shorter I could spend more time writing or playing music, designing clothes and being creative outside of school,” she said.

Her goal is to “get inspired by something and do something creative every day.”

Elliott has also adapted his lifestyle to include fashion as well and has an instagram, cor_meumclothing, that promotes his brand. Once he reaches 300 followers, he plans to release a 10 item season of clothing, all centered around the heartbeat.

In the end, he hopes that everything: his instagram, sewing and clothing brand will lead up to one thing: a career in the fashion industry.

“Hopefully I’d start being able to work with other fashion designers to get a real brand out,” he said. “I want to be in that line of business, runway shows, working with other collaborations…”

All of their styles are different, but Loggins sees a commonality in their all of their hopes for success.

“Whoever rises to the top, creates a spark, is a person whose idea of beauty either matches best with the rest of the world or speaks to people in a way that maybe they haven’t come across before.”

All three are trying for this effect.

“This is the new fashion age and we want to start that,” Elliott said.