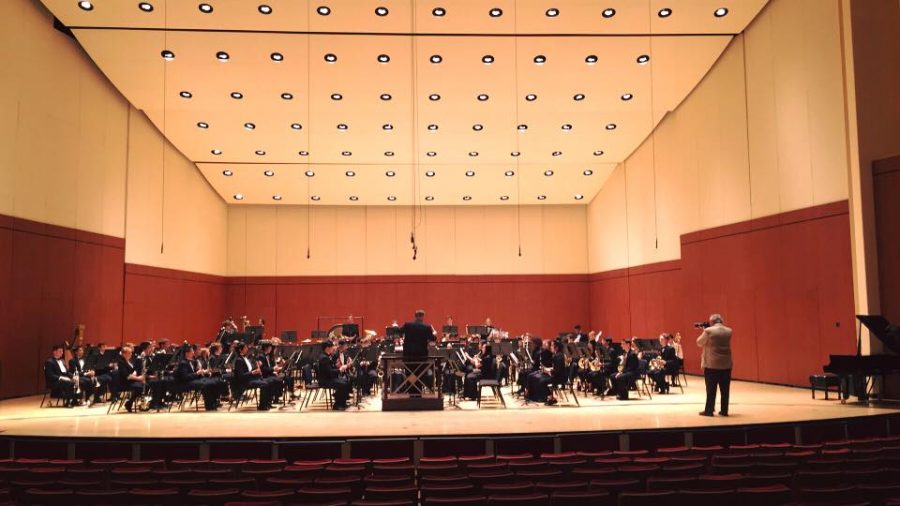 With his baton raised, Scott Stewart makes one swift motion, and suddenly, the group of one hundred or so students in front of him snap to attention. Another twitch of the baton, and the notes of “Festivo” ring through the high school auditorium.

On Oct. 2, the Atlanta Youth Wind Symphony (AYWS) opened its 2017-2018 season with a concert entitled “Zenith of the Maya.” The concert concluded with a song of the same name.

AYWS serves as Atlanta’s premier honor band. Students from up to 60 different high schools in the metro Atlanta area audition for AYWS. These musicians are typically the best in their school, regularly making honor groups such as All-State. Musicians from Decatur occupy three seats in the wind symphony. This musical drive allows students to experience a musical setting unlike others, Stewart said.

“AYWS is special because it fulfills its mission of providing a high level artistic, educational and social experience for its members in a non-competitive environment,” Stewart stated. “The goal is great music-making.”

Leading AYWS for the past 18 years, Stewart has continuously worked hard to ensure each concert produced is memorable and not just another band concert.

“I often try to create ‘themed’ concerts or collaborations so that the concert experience—for performers and the audience—is a little outside the box,” Stewart stated.

The finale of this concert, “Zenith of the Maya,” represented something Stewart described as a “20 minute tour de force” and an “epic, programmatic piece which pushes all of the players to their limits.”

AYWS alto saxophone player and junior Nicholas Goldfarb is one of the three musicians from Decatur along with trumpet players Emily Park and Sawyer Prichard. Goldfarb agrees with Stewart’s description of the finale piece.

“I’ve never really played anything quite as difficult [as ‘Zenith of the Maya’],” Goldfarb said. “There was this one time where I spent an hour straight practicing two measures. They lasted about a second and a half in the song.”

Though “Zenith of the Maya” proved to be the epic finale, the concert also featured a variety of other pieces. The concert started high-energy, playing “Festivo” by Edward Gregson but then moved to a slower, quieter work composed by Steven Bryant, “Nothing Gold Can Stay.” Also included in this concert was a suite of folksy music by musical phenomenon Percy Aldridge Grainger which then led to the penultimate, cinematic work, “Endeavor” by Michael Barry.

Though these pieces didn’t seem cohesive at first due to their varying styles, they formed a strong concert.

“It was a great variety of pieces that somehow came together to make sense in the concert,” Goldfarb said.

In the end, both Goldfarb and Stewart were pleased with how the concert turned out.

“The students were ‘on’ and ‘in the game,’ fully invested in not only correct notes and rhythms, but—more importantly—a musically, artistically warm, interesting and passionate performance,” Stewart stated.

For now, the young musicians of AYWS continue to practice tirelessly and come together every Monday night in hopes of creating more unforgettable music.