As a “lifelong learner,” science teacher Kevin McMahon is always adamant about obtaining knowledge. By sharing his passion for science, he hopes to help students and teachers alike in developing their interests through new opportunities.

During his search for more learning opportunities in 2012, a fellow teacher reached out to him with an offer that would ultimately satisfy his yearning to acquire new information.

“It just sounded like an awesome experience,” McMahon said. “I wanted to do it, so I kind of tucked it away. A couple years later, I decided, ‘Hey this would be a great thing to apply for.’”

Gallery|2 Photos
Before leaving, McMahon's daughter made him a cake to celebrate his trip.

In the summer of 2014, McMahon embarked on a two week journey with the Teacher at Sea Program created by the National Oceanic and Atmospheric Administration (NOAA).

“Teachers describe this authentic research experience as transformative and one that allows them to bring new knowledge and excitement back to their classrooms,” program director Jennifer Hammond stated. “[NOAA grants them] a chance to participate in cutting edge science on the ocean and to work side-by-side with world-renowned scientists.

Leaving from Beaufort, North Carolina on a ship named ‘The Pisces,’ McMahon joined over 750 other teachers gaining experience with science out on the sea.

While exploring 60 miles out into the Atlantic Ocean, the ship sought to collect data that would indicate whether grouper and snapper populations were being over fished.

“The big concern is that if they are over fished, we might wipe them all out and no longer be able to use them for food,” McMahon said. “There are examples all throughout history of humans going out and decimating different populations for food.”

Previously, the amount of snapper caught by commercial fishermen alerted NOAA scientists that they were being over fished. While a snapper ban was established, the information given by commercial fisherman was necessary to assess the progression of the fish population. To safely evaluate this, NOAA instead created surveys to see “how the snapper and grouper populations were bouncing back.”

Gallery|16 Photos
McMahon poses for a picture in his immersion suit which is used to protect him when going overboard.

After two weeks, McMahon soon exchanged the snappers for 6th graders who he couldn’t wait to share his experience with.

“I’ve always been curious,” McMahon said. He hopes that his students think about all of the questions textbooks leave unanswered. “Hopefully, that will inspire them to start thinking and wanting to search for those answers.”

Throughout the school year, using footage from the GoPro cameras on the chevron traps, students can learn about various fish species in an interactive way.

“I’ve created a lesson that allows them to be fisheries biologists where they identify these fish,” McMahon said. “They get to experience the visual element of learning while counting the different fish species like the biologists do.”

Gallery|2 Photos
"They would turn [the GoPros] on right before they were pushed into the water and they were able to get film footage of what was swimming around the traps," McMahon said. "Sometimes you would see certain fish that were swimming by that wouldn't end up in the trap, but they could still count them because they knew that they were out there. This was important because we might be undercounting if they didn't make it into the trap."

Another way that students get the unique experience of McMahon’s interactive approach to teaching comes from a NOAA requirement for the teachers that participate in the program.

During his trip, McMahon was required to keep a blog detailing various fish species encountered, day by day events and fond moments along the trip. Students get to use this resource along with the many others that McMahon hopes that they come to appreciate.

“I think what’s really cool about the NOAA Teacher at Sea Program is that, as a teacher, I got to see all of the different resources they have on the internet for their teachers, students and the world at large,” he said. “NOAA does a fantastic job supporting teachers and providing data for us to use in the class.”

McMahon not only hopes to inspire students inside the classroom, but in the professional realm as well.

“There are tremendous amounts of opportunities out there,” he said. “Don’t be shy about exploring the different options or emailing college professors about what they’re doing and finding out more. That may lead to job opportunities and at least an understanding of what they do. Some may not respond, but you’ll be surprised by how many people will actually take the time to reply when you show an interest.”

After being inspired by McMahon, a fellow RMS teacher brought a new sense to interactive teaching.

As the 2017-18 school year rolled in, O’C-B only had four weeks to get to know her students before she departed. In these short weeks she was able to get the group excited for the work that she was about to participate in and what she would bring back to the classroom.

The field work makes the distance worth it.

“I like to look for opportunities to explore and to get back to science,” she said. “Getting field experience is very important to me along with refreshing my knowledge and learning more.”

O’C-B, who was a field ecologist before teaching, cruised the internet and other resources until she found the Teacher at Sea program.

Then, on Aug.28, the ‘Bell M. Shimada’ departed from Port Angeles, Washington and sailed out to sea with a team of scientists and crew members that moved non-stop for 16 days. 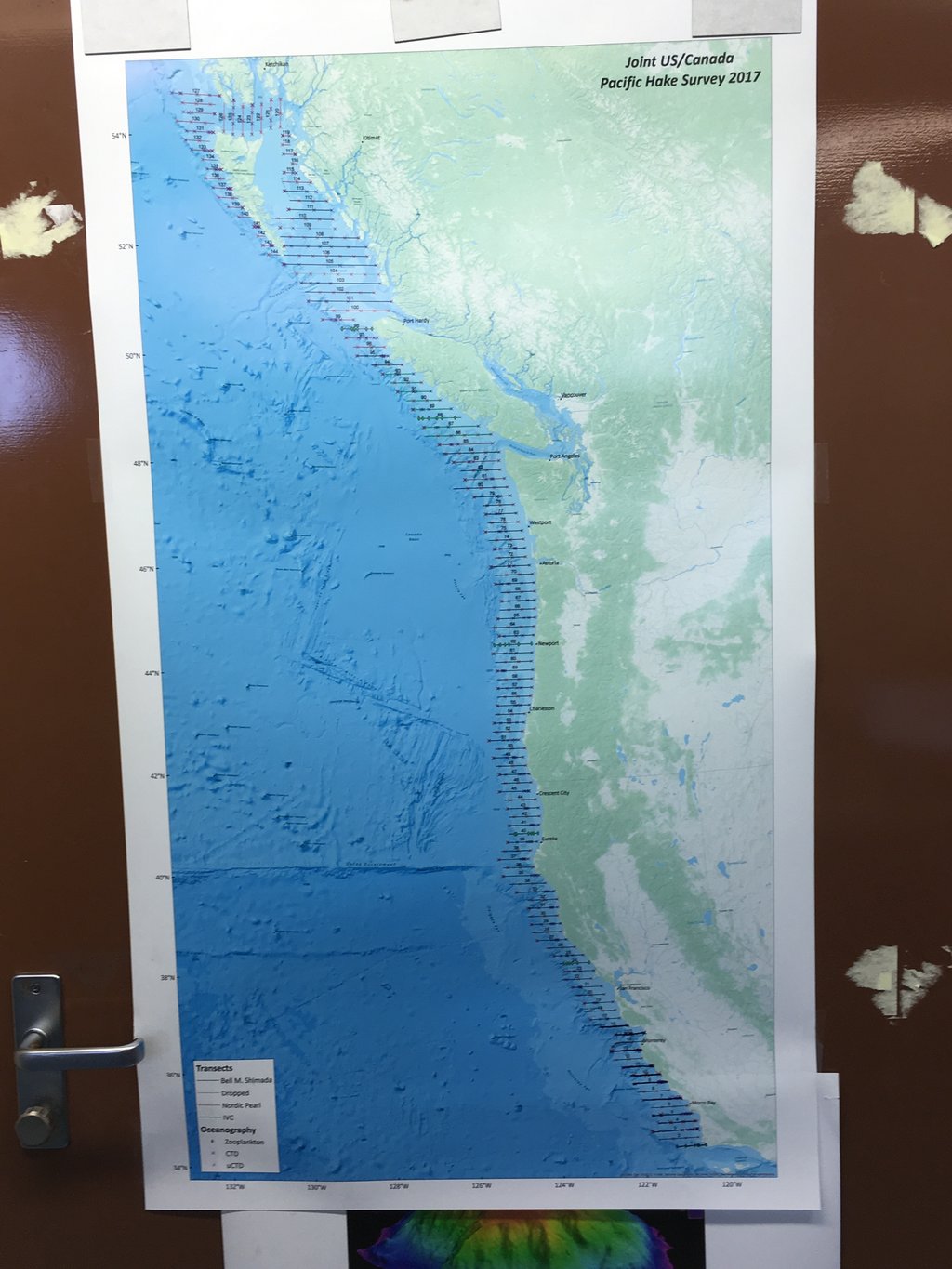 Dizziness, headaches and nausea were all symptoms she experienced in the first few days before finding her sea legs.

Additionally, a series of drills ensued in the first days of the trip to ensure that everyone on board knew what do in times of emergency along with an informational video about the attitude, culture and conduct of the crew.

For O’C-B, the purpose of the Teacher at Sea program was to “get science teachers hands on, real life experience that they can then bring back to their kids on multiple levels.”

The first level is excitement.

Along with energy and enthusiasm, the second level is to get more in depth knowledge of the content and then bring that back to the classroom to “practice more true science and make it more relevant for the curriculum.”

For this particular journey, the purpose of the Teacher at Sea program was to perform a hake fish survey and from this, O’C-B could take her acquired knowledge to the classroom.

A trade agreement between the United States and Canada allows for a certain amount of hake to be commercially fished by both parties. While it is not yet endangered, the populations must be closely monitored so that the fish are not over fished. NOAA and Canada work together to collect data and set the limit for the next year based on the population’s ability to reproduce.

The ‘Bell M. Shimada’ crew followed a pretty clear schedule each day to perform the survey.

Every morning, O’C-B woke up in a bolted four bunk room. She would then walk to eat breakfast at 7 a.m. and sit down at big long tables where everyone on the ship would eat together.

After a meal of “for real breakfast” featuring pancakes, bacon and others, the group would disperse for about an hour while the chief scientist would be monitoring the lab equipment.

During this time O’C-B could go up to the highest point of the ship to go whale spotting or read a book.

Once the chief scientist sent for them, they would then perform a marine mammal watch before fishing in order to ensure that no large mammals were near the ship that could destroy or get caught in the nets.

After performing two consecutive mammal watches, they would begin to fish.

The load of fish would be dumped down into their lab and the crew’s task was to measure the fish, weigh the fish, cut the fish open to take out certain organs, get full work ups, and take an overall “guestimate” of certain populations.

“If you’re coming at it from a preservation sort of mindset, that you’re there killing organisms in order to preserve them — it’s a very confusing and mixed message,” O’C-B said.”

After damages to both of their giant 350 foot nets and snapped traps, the crew was unable to continue their usual survey work. They instead decided to do other projects that were still valuable to the survey.

“We used methot nets to catch krill, jellyfish and sea tongues,” O’C-B said. “If you have the food for the hake fish, you can assume that there will be hake fish. I really enjoyed the methot net because it brought up smaller, unusual organism. I am quite thankful that we didn’t do a lot of hake fish because watching and holding the big fish as they are basically suffocating to death, was really hard to do. We would be measuring them and cutting them open as they are flopping around and that was really hard for me.”

Additionally, the crew used acoustics to identify the fish, which O’C-B greatly appreciated.

“It’s inherently not as invasive as other forms of survey could be,” she said. “I get it though. In college I was taking an ecology course and I had to kill a whole bunch of insects to see how many insects there were. In this case, the benefits outweigh the downsides. Having the information is the big picture and 10 years of survey data allows for a database where we can see change.”

In her free time, O’C-B used a blog, video chats and texting to tell her students of her experiences each day.

“They were interested in what I was eating, what my room was like and if I had puked yet,” she said. “I just try to keep up the enthusiasm. It’s still super important that they see that I’m an adult but I’m still trying to find something new and challenging. I was very clear when they were like ‘what if you get sick? You’ve never been on a ship before!’ That’s not going to stop me from trying it.”

Back in the classroom, O’C-B drafted ecology related lesson plans, but the true value of the experience is that her students get an understanding like no other.

Gallery|3 Photos
“The very first interdisciplinary thing will be with art because the guy who was the head of our fish lab brought paper and paint and we actually made fish prints," O'C-B said. "I had never even heard of this before and this is a very old art form where you take the dead fish and you paint it different colors and you put this parchment paper over it and you press down. There are world renowned artist that do this. I did one of those and I was talking to the art teacher about doing an activity after school with kids that might want to do that."

While O’C-B works inspire students in the classroom, she acknowledges its limits.

Additionally, O’C-B hopes her students find the career path that works for them.

“For some folks, science is just a passion that becomes a hobby on the side,” she said. “When you attach a boss and dollar sign it can either hinder the experience or create a convenient opportunity. Talking to professionals in the science world helps you get a sense of that. But you have to put yourself out there to even discover that because what happens beyond the classroom is the best part.”

Time Out with the Teachers: Episode 1: Ms. Coffin

Jana Johnson-Davis elected and sworn in as school board member