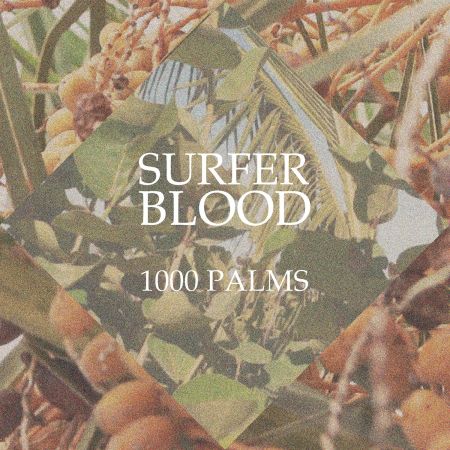 Even with guitarist Thomas Fekete recently diagnosed with cancer, Surfer Blood still managed to pull together a third album, 1000 Palms, released May 12, 2015.

Rising to fame in 2013 after their second album Pythons, the band took on the mellow, indie persona we’ve seen in so many other groups. Extremely similar in tune to their previous albums, “I Can’t Explain” and “Island” drone on with repetitive guitar riffs and a tired-sounding lead singer John Paul Pitts. The upbeat tempo Astro Coast clearly didn’t make the cut this time around. 1000 Palms offered Surfer Blood the chance to revive their formerly poppy sound and leave behind the sullied reputation, but for the most part, they decided to stick to the norm.

“Say Yes to Me” and “Demon Dance” from Pythons and “Twin Peaks” from Astro Coast offer much poppier melodies and I often find myself subconsciously humming them. 1000 Palms, sadly, does not seem like that kind of album. There’s no doubt the group tried to pull off the sad and depressing lyrics with an indie

beach-pop airiness, but the unchanging tempo and go-to standards proved ineffective. On a good note, “Point of No Return” offers a Boxer Rebellion-like impression with drums providing a beat and a light guitar pluck present in the background.

The surfers remained off the stage for quite a while until they hit the concert scene at Coachella 2014 and in Atlanta at the Shaky Knees Festival, “offering digestible pop to a decent-sized crowd” on Friday, May 8, 2015.

Despite the failures of this album, Surfer Blood attempts – and sometimes succeeds – to channel new wave tunes and “Covered Wagons” proves an advance away from their status quo. The lyrics, “What should be a golden age starts to waver on its axis,” make a low-key reference to Pitts’ domestic abuse charges back in 2012.

For being recorded in drummer Tyler Schwarz’ living room, the album makes decent for absent-minded music listening (it fills the void). It certainly has the distinctive Surfer Blood sound recognizable from the oddly-similar-to-Weezer (“Feast – Famine” and “Saber-tooth and Bone” provide strong evidence) beachy tunes and cultured integration of synths.