In response to the Parkland shooting, Decatur students participated in a national movement for safety in schools.

On March 12, in a dimly lit room at the bottom of Oakhurst Presbyterian Church, a new union was formed.

Students, teachers, City Schools of Decatur School Board members, journalists, community organizers, parents and attorneys all filled the metal folding chairs to meet and discuss one cause: the ENOUGH National School Walkout created by the Women’s March Youth EMPOWER.

Later, on March 14 at 10 AM, students all across the country chose to take a stand against gun violence and commemorate the lives lost in the Marjory Stoneman Douglas High School shooting, but not without the experienced tips from the community.

Coming from all around the city, organizers and attorneys created a coalition “in support of March 14th student walkouts.” This entailed not only providing information on rights and consequences for students, but informing adults on the ways in which they could support students.

“I need you all to understand the level of commitment in this room,” attorney Mawuli Davis said. “These folks have real life on the ground experiences with the battle scars and the tears and everything that comes with it.”

The group gave guidance not only on how students could stay safe, but the ways in which the adults in the community could help them stay safe through short trainings on how to be legal observers and peace marshals.

“We want to make sure everyone is clear about the different roles,” Davis said. “This is a collective thing, you have to link with other people and work with the organizations within your schools.”

The students who attended the meeting included Black Student Union (BSU) members, Student Government Association members and students from other school districts, who all sat attentively for the advice and connections with community members.

“Student leaders need to spread word to others about how to be a leader and collectively, you should decide how you all are going to conduct the walkout,” Davis said.

One after the other, the community leaders spoke to the group.

After opening words from attorney Davis, Parris advised the student participants and adults wishing to act as peace marshals.

Parris, in order to promote peace, advised students and adults to stick with a buddy system, communicate with those that are leading the march, as marshals, report any violence or unrest that occurs, and to bring a charged cell phone to have an account of events. She especially stressed trying not to over do anything to the point where the situation could get dangerous.

“This is enough for now,” she said. “There is something so powerful about even doing a march. You have to remind yourself and the people around you that this is more than enough right now, this is a big statement. You are all brave enough to do this now and this is what it should be. This is not the space to do too much.”

Mclennan went on to further develop this point.

“This is your event and this is your history and this is going to be life changing,” he said. “What students are doing across the country is changing everything. The leadership role students have played is so important and we are here to be a buffer between the event that you are creating and any interference that may try to stop you. The greater turnout there is though, the greater protection you will have.”

Gallery|3 Photos
More organizers decided to speak to the group. Tiffany Roberts (left) and Jeff Filipovits (right), public defense attorneys, advised the group on how to stay safe in the walkout and to respect others' choices on whether to walk out or not. "The constitution protects your speech but it doesn’t protect you harming other people and infringing on their rights," Roberts said. Filipovits furthered this point. "It’s really important that you all encourage others to make the right decisions for themselves," he said. "Support each other to make your own decision. It doesn’t begin and end with this walkout and there are lots of other things that you can do to support this."

Towards the end of the coalition, Franzen stressed that “everybody here needs to be a peace marshal no matter what role you are playing.”

Franzen, who has been arrested 17 times for peaceful protests, then led the group in a short conflict resolution training where adults played the angry instigators and students had to “change from winning the argument to de-escalating the argument.”

Gallery|3 Photos
"Isolate the problem. Don't touch the other person."

In the very last moments of the meeting, a moment of silence ensued. While shortened, it paralleled the 17 minutes of silence for Parkland victims that students would later take across the entire nation.

Joel Edwards, a community member at the meeting, lost his son in February due to gun violence. A circle formed, Edwards included, as everyone held hands and bowed their heads.

In that moment, students truly understood the importance of the movement, later gained connections with community leaders and other student organizers and received training that would ensure their safety.

Two days later, luckily though, students did not have to make use of this training.

On the morning of March 14, the students participating in the march were more than protected.

Gallery|15 Photos
Two large trucks blocked off both entrances to North McDonough, police officers watched from afar and parents, community members and supporters gathered on the other side of the street, gave shouts of encouragement, made signs and stood strong on the chilly Wednesday morning.

As student organizers set up and prepared for the walkout, members from the community stood to the side, ready to offer any support needed.

“I’m with the organization called Creative Community For Decatur and Dekalb: Black Lives Matter (CC4D: Black Lives Matter),” High said, “and it’s all about supporting the youth of Decatur who want to stand up for their rights, practice civil disobedience and support a cause that’s very important not just for this area but for this country and promoting gun control.”

Mclennan, who has worked with Hate Free Decatur to take down the confederate monument, acknowledges the history of the movement.

“This movement is exciting and life changing for students involved because I know when I got involved in high school, it made a difference for the rest of my life,” Mclennan said. “It gives people a purpose and reason to keep going and keep fighting. This is not the beginning, Black Lives Matter started addressing the issue of gun violence and this has been going on for a very long time, and this is certainly not the end.”

On March 14, over 400 Decatur students participated in the nationwide Walkout in remembrance of the lives lost in the Parkland shooting and support of gun reform.

At 10 a.m. on Wednesday morning, hundreds of Decatur students exited the building and congregated in front of the Performing Arts Center (PAC).

After speeches by Andi Kehz, Christopher Rosselot and Max Moore, students participated in a 17-minute-long moment of silence. Each minute, students read the name of a Parkland victim.

Watch the protest highlights below.

Gallery|24 Photos
The Decatur student walkout was organized by the SGA and BSU. During the walkout, freshman Max Moore, who lost a close friend in Parkland, gave a speech. After, all students sat down and participated in 17 minute moment of silence where a name of a Parkland victim was read out each minute. 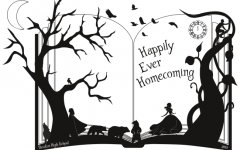