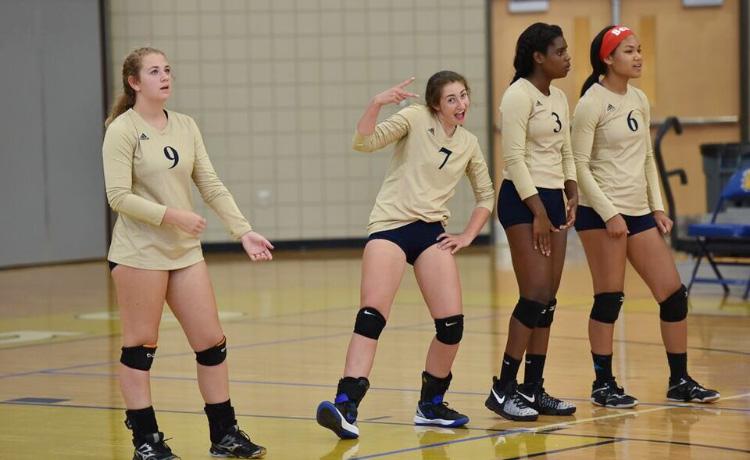 The Lady Bulldogs have been killing it. Going into the postseason, the team is 27-10. They are the second seed in the region.

“Our defense is our strongest point,” she said. “We shape our game play around it.”

On the offensive side the team has a handful of strong hitters. Outside hitter Sapphire Simpson is a consistent presence for the Lady Bulldogs and leads the team in kills.

“Sapphire is a great all-around player,” Rumsey said. “She’s very smart with the ball and is a strong hitter.”

Veteran experience is shown in the plethora of returning varsity players. The team only brought in four new players.  Each player wants to conribute to Rumsey enjoys the team’s initiative to play up to their potential everyday.

“I’m proud of the amount of team leaders we have on the team,” Rumsey said. “Everyone on the team is very responsible and willing to step up when we take the court, regardless of grade or position.”

Outside hitter Elizabeth Swank agrees that the team’s dynamic contributes to their success.

“The team is really developing and learning how to work together,” she said.

After two months of running, Decatur’s cross-country team is heading into its only home meet of the season with high hopes. At their last meet, an Oct. 1 showdown in Rome, the girls’ varsity team took sixth place and the boys’ finished tenth, setting both teams on course for the state championships in Carrollton on Nov. 5.

Head coach Mary Souther takes pride in her team after every race.

“Running a cross country race is hard,” she said. “I appreciate everyone who crosses that finish line, no matter what their time is.”

Senior Sam Ellis and freshman Haley Rose have consistently outpaced the pack. At the Kosh Classic on Aug. 20, Ellis finished first and Rose second in their respective varsity races. Rose’s achievement is all the more impressive when considering that this is her first time running cross-country.

“I didn’t really know what to expect when I began [running],” she said. “I’d heard that there were a ton of really fast girls from all different schools, so I wasn’t really sure how I’d do.”

Varsity captain Anna Mahany, a seven-year veteran of the program, knows a winning group of runners when she sees one.

“Both teams have run really well this year,” she said. “I’m pretty confident that we’ll go far at state.”

After a season without seniors, first baseman Olivia Brozek was “excited by the team’s potential” this season.

Sophomore Haley Russell is “an amazing clutch hitter and always helps the team when she goes up to bat,” Brozek said.

She also believes that junior Katie Cassidy’s pitching assists in the team’s success.

Since the team did not lose any seniors between last season and this season, no major changes had to be made.

“We were able to simply continue what we were doing last year,” senior Claire Smith said.

This season the Lady Bulldogs are undefeated in their region for the first time.

“As a senior, it has been amazing to have such a strong last season,” Smith said. “I’m ready for post season and what it will bring.”

To host state playoffs the Bulldogs had to keep their spot as the number one seed during the region tournament. On Oct. 5, the Bulldogs played and won their third game against North Springs 11-10, sending them to compete for the region championship against Riverwood. They won 10-2.

Since the beginning of summer, the team has “seen each other everyday.” This has allowed the players to bond and “really lets [them] trust each other during the games,” Smith said.

This trust has proven to be valuable as the Lady Bulldogs advance to the state playoffs as region champs.

Entering a brand new region, 5A, and classification this year, the football team began the season with high hopes for success. With the abrupt transfer of star player Grant Walker, head coach Scott Jackson was disappointed about the way the situation was handled.

“Grant caught me by surprise because he didn’t tell me anything,” Jackson said. “I’m a little bit upset with him about the way he handled it.”

On the other hand, the loss of 12 seniors gave opportunities for other Bulldogs to step up and take over new roles. Sophomore running back Antonio Kilgore is one of the many players who has had an “influential role on the team” thus far.

According to Kilgore, freshmen Luke Clark and Doneiko Slaughter, as well as sophomores Temesgen Yohannes and Marcus Hood have stepped up.

In their second region match-up of the season, the Bulldogs faced a 47-0 halftime deficit against Grady. Jackson and star senior receiver Terrill Hall told the team to put the first half out of memory. Jackson told them to remember the three parts of a game: the event, response and outcome. At this point in the game the response mattered the most.

“We listened to him and came out and tried to go as hard as we possibly could,” Kilgore said. “That second half of that game was the best effort we’ve given all season.”

Despite the stronger second half performance against Grady, the Bulldogs have struggled to finish games all season.

“Everybody we have played has more numbers, and they usually have more depth on both sides of the ball,” Jackson said.

As the season continues, Jackson suggests that the team can still finish off the second half of the season strong.

“We just got to continue to work, keep fighting and keep playing,” Jackson said. “Hopefully we will be able to finish a game off.”