LSU. UNC. UGA. FSU. UVA. Buford. Grayson. Calhoun. Tucker. Decatur. Whether in college or high school, home or away, Americans rally around football as a source of “spirit” and “energy”. Over 145 years, the sport grew beyond a team’s struggle for victory – now it is our “American pride.”

To the football uneducated it means Coke chases, half-time galas and a day of entertainment. To millions of sports fans nationwide, it’s where “thrills, spills and heartbreak”  make heroes of 11 men in padding.

And every year, fans like junior Luke Speed gather in their homes to cheer on their heroes with nachos, cheese and salsa. Since sixth grade, Speed hosted the Decatur Presbyterian youth group to show their pride for the game.

“I’ve hosted the party for four years now, except last year,” Speed said. “People would come over, [and] we’d have one TV on upstairs and one downstairs.”

While most of the members will participate, every party guest shows different symptoms of football mania.

“For me, [the party] is mostly about the football,” Speed said. “But it’s mostly a social thing for the youth group.”

Super Bowl parties are a time for the Decatur Presbyterian youth to hang out and socialize, but the game keeps them on their toes throughout the festivities.

Not many other countries play football,” Speed said. “For me, it’s. . . American pride.”

“[Once in] seventh grade, we had a whole table just full of snacks,” Speed said. “It was a really light table, really flimsy, filled with chips, dip and salsa. When the Steelers scored, the person sitting at the table got up really fast, and he knocked out the table’s leg. We still have stains [in the carpet] where all the salsa and nacho cheese and everything spilled.”

Speed and his family get ready to party for college games. However, Decatur’s home games never fail to pump him up either.

“I’m definitely more mentally excited for a college game, because you hear college and you’re like, ‘Oh my God, college is cool.’ I get more physically excited at [Decatur] home games because I’m yelling and screaming chants,” Speed said. “It’s two different kinds of excited, but I’m excited for both.”

No matter the setting, Speed reserves football as a special time.

“Not many other countries play football,” Speed said. “For me, it’s. . . American pride.”

In the third episode of the show “Friday Night Lights”, viewers get to know football’s rougher side. During a classic dark and stormy night, Dillon High School’s football team lines up for wind sprints.

Partway through the sprints, the mud-soaked team is stumbling, gasping for air, and boys bend over to vomit. When giving up is the most inviting option, one voice comes through over the thunder, the splashes and the groaning.

His teammate finishes for him, “Can’t lose.”

He begins again, this time louder and with more conviction. And this time, the whole team joins in the response.

For sophomore Grant Walker this unflinching attitude makes football a lifelong dedication “to be great” and to “succeed” at what he does.

“I started playing football because my dad played his whole life. . . he got me into it basically from the moment I was born,” Walker said.

It gives me something to work for everyday in life.”

Walker’s father was team captain at Clemson University for four years, and helped cultivate his own enthusiasm in his son. Walker had his first chance to live up to his dad’s legacy when he was five years old in the first game he ever played.

“On the very first play, I ran for a 45-yard touchdown,” Walker said.

His career progressed far beyond that memory, but it stuck with him, as did the sport. “It gives me something to work for everyday in life, and makes me stay focused on what I really want,” Walker said.

Walker’s motivation to push through is that family tradition of playing. Late in the 2014 season, he broke his hand but continued to play in the upcoming home game against Maynard Jackson.

“When I scored with my cast on, that memory could symbolize my football career as a whole,” Walker said. “I say this because it seems like I’ve had injuries throughout my whole life, but over time I’ve just learned to play through them.”

“Clemson [University],” he said. “If I had to pick a school Clemson would definitely be one of my top picks.”

Both high school and college football games bring “high energy” and “spirit” to supporters, according to Decatur alumnus Frank Wynne. He now attends Louisiana State University (LSU), and enjoyed football at both Decatur and LSU. However, when Wynne transitioned from Decatur to LSU, the chaos at college games amazed him.

“Tailgating starts at 8 a.m. for a 7:30 p.m. game,” Wynne said. “There so many crazed fans. I’ve seen kids punch holes in the wall after leaving an upsetting game. One kid put his head through the wall.”

The spirit and enthusiasm is contagious.”

“Over 8,000 students attend each of our home games,” Woodson said, “and their passion and enthusiasm is a critical part of the

“The campus is packed on the day of a football game,” he said. “There are people everywhere, painted purple and gold (LSU colors) and everyone is extremely loud and rowdy. It’s sort of like [Decatur] homecoming on steroids – not a good day for studying.”

Despite the potential distraction, Woodson believes the sport weaves tightly with our educational system.

“While Oxford and Cambridge have their tradition of crew [rowing], the first football games in America were university teams competing,” said Woodson. “Football, since its inception, has been linked to American college campuses.”

“[College football] has a large fan base with such a deep history,” Wynne said, “that the spirit and enthusiasm is contagious.” 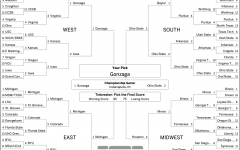