Why my grandmother’s hospital bed kept me from smoking

I don’t know who set up the hospital bed in her living room, but it cradled my grandmother surprisingly well.  I had been calling her “Baba” for as long as I could remember, and that name echoed around her empty apartment that afternoon in rhythm with her heart monitor.

I have four of Baba’s oil paintings hung around my room. The texture of the brush strokes stick out decades after their completion. I look through her old sketchbooks every once in awhile, sliding my fingers across the rough tooth of the paper, never adding a drawing, just looking. She left me oil pastels, her palette knife and memories that linger longer than the smell of her last cigarette. She left me love, inspiration and a concrete reason to never smoke for the rest of my life.

Baba wasn’t my biological grandmother and was some 70 years older than me, but I leapt over those gaps into her studio before I could even walk.  Her gentle nature nurtured my interest in art as the two of us spent hour after hour setting up compositions for our finger paints and sidewalk chalk.

I was around four years old the first time I remember seeing one of her works of art. It was a graphite portrait of my mother as a young girl: the side of the pencil shading the contour of her cheek, its tip detailing the sharp curve of her eye. In later years, I’ve spent hours looking through her studio and our attic, searching for old canvases, sketches and palettes. These discoveries forced my young mind to see visual arts as more than just messy finger paints but as a skill that’s carefully crafted over a lifetime.

Baba would always walk outside or around the block if she needed to smoke a few, intentionally leaving me to scrape chalk dust into piles and stick my hands into jars of paint up to my wrist.  She always came back smelling ripe, nicotine clinging to her fingers like it couldn’t accept that her smoke break was over.

That separation she tried to maintain between myself and her cigarettes faltered when I was five years old as I confronted the reality of her addiction and her terminal lung cancer diagnosis.  I didn’t know what cancer was, where it came from or what it meant for our family until my moms gave me some cautious warning that terminal meant incurable and that Baba was going to die.

Five year olds cry the same kind of tears that 40 year olds do and my parents knew it.   Around the time of our family’s acceptance my mom brought me a red spiral bound notebook for writing and drawing in order to process what I was feeling in a constructive way. Somewhere in our attic lies that notebook, with a single line printed on the first page. “When Baba dies it will be sad.”

I remember very little after that, besides the hospital bed that was brought into her living room so she could live at home while she could. We ate Pizza Hut together and I scribbled in coloring books while she took her medicine and had soft conversations with our family.

She died in October of 2005. 135 months later, I still hate the smell of nicotine and the way smoke billows like you lit a bomb instead of a cigarette.

I can count eight of my close friends who smoke regularly. They sit outside of coffee shops, restaurants and under trees and pass out menthols like candy.  Every once in a while, someone lights one and puts it in my hand without me asking and I let the ashes fall without the cigarette touching my lips.

I don’t criticize someone’s decision to smoke, or remind them that the 20 cents their holding between their fingers could kill them, because I’m sure they know that.

I’ve chosen to never smoke because despite the genuine talent, kindness and compassion that was rooted in the very core of her being, I hate that Baba’s addiction ended our relationship before I could take the training wheels off my bike.

My memories with her aren’t tainted by nicotine.  I’ve seen pictures of her cradling me the day I was born and holding my hand as we walked along Tybee Island that haven’t been touched by smoke.

I love Baba and I love our memories. 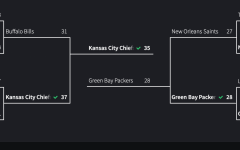 Welcome to the second edition of NFL Bold Predictions. Last year, we established the ground rules about what it meant to be bold and as it turned out,...

Why my grandmother’s hospital bed kept me from smoking