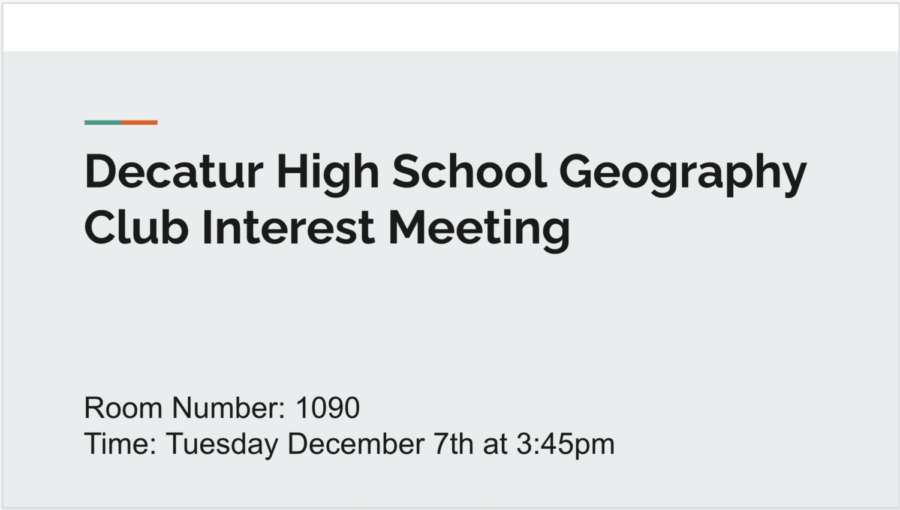 The Geography Club started by Kieran Bailey and Owen Kelly hopes to make a change: a change in terms of basic geography knowledge, in terms of building a strong community of knowers, and in terms of sharing a cultural awareness amongst Decatur High students.

“Something that inspired me to start this club is that I’ve always just had a passion for learning about other cultures in different places in the world. I have always been interested in geography and there haven’t been courses that let you learn about different places, the world, the geographical makeup of specific places,” Bailey said.

This passion directly translates to the work Bailey is doing in the club. “For geography club, I think we will be going more into depth on the geographical whereabouts of different locations of numerous countries, their different capitals and how the capitals are structured, why different countries have chosen to have the capital city where it is, Bailey said. I believe it is also very important to understand different geographical features of different countries, like the mountains in South America, or the deserts in the Middle East”.

As of now, the geography club has recently invited students to its first interest meeting. There were about 15 people there and students were acquainted with the 12th-grade leaders Kieran Bailey, Owen Kelly, and Jeremy Stettner.

One activity Bailey has planned for future meetings is an online geography game called Geoguessr. In the game, a player is randomly spawned in a location on Google Earth, where they can navigate and look at street signs and physical features to find out their exact location. Bailey hopes to play a couple of rounds of Geoguessr as a group every meeting.

“Geoguesser is a really good way to get an idea for different landscapes because I believe there are visually a lot of stereotypes in the world for how places are, and I feel like at Decatur High School we don’t really have the opportunity to combat these stereotypes” Bailey said.

According to the Government accountability office, geography is generally taught as part of social studies, but data shows that more than half of eighth-grade teachers reported spending a small portion (10 percent or less) of their social studies instruction time on geography. Further, according to a study by an academic organization, a majority of states do not require geography courses in middle school or high school.

By creating an educational hub that allows for the exchanging of perspectives and endless opportunities, the geography club strives to make a positive change in the Decatur High school community.