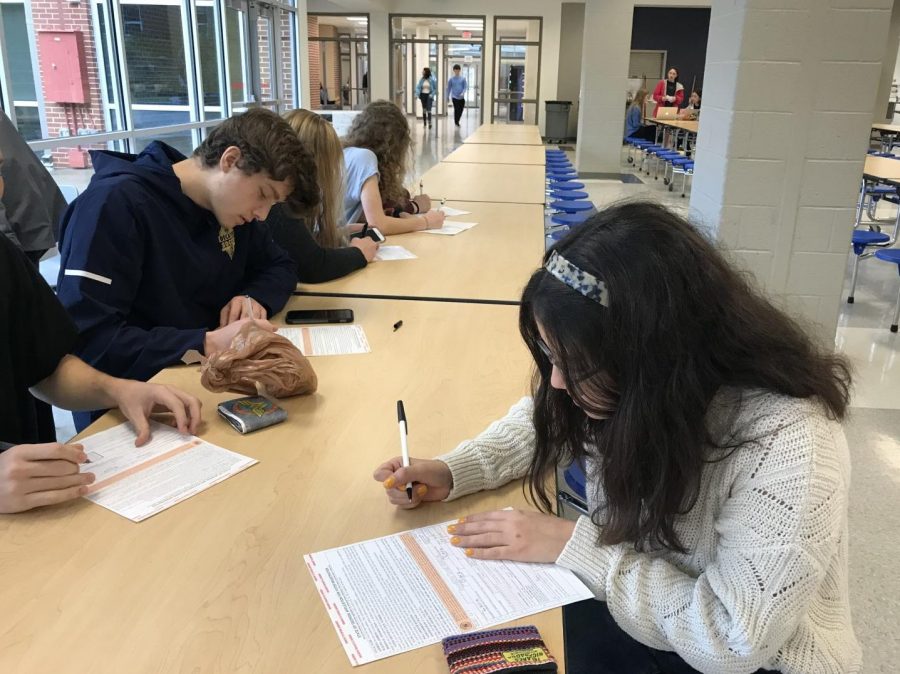 During all lunches on Feb. 14, the Student Government Association (SGA) will host a voter registration drive to assist eligible students in the voting process. The event is in light of Georgia’s upcoming presidential primary election on March 24, which has a voter registration deadline of Feb. 24.

“Voter registration is something that I’m really passionate about,” Daniel said, “so when I was first elected for SGA [in] junior year, I thought that it would be a great opportunity to use the SGA platform to make sure that folks here at Decatur High School are registered to vote.”

The drive began during Thursday’s advisement. Students 17 and a half years or older, with their license on them, were invited down to the cafeteria to fill out registration forms. SGA members, student volunteers and Daniel’s mother were present to answer any questions and ensure registrations were accurate.

“First, we have to collect everyone’s signatures to affirm that registration is something they’re doing under their own free will,” Daniel said. “Then we make sure students fill out the six-part form very carefully, because if anything’s off—even a spelling in their name that is different from spelling in Georgia state records—it could mean that their registration is rejected.” 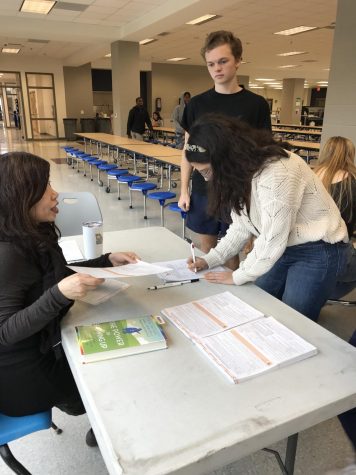 “I was definitely excited [to register] because the fact that I’m old enough to do that now is exciting. Feeling like I’m actually contributing to society feels good, even though it’s just writing on a piece of paper,” Levin said (right).

According to Daniel, voter registration is more difficult in Georgia than it is in a lot of other states. In a 2016 study conducted by the Associated Press, it was found that election turnout varies significantly from state to state. For Georgia, voter turnout recorded a little under 60%, with a nationwide average of 59%. Factors like deadlines, voter ID laws and criminal records all play a part in increasing registration difficulty and determining a person’s eligibility to vote.

Despite this, the 2020 elections are projected to produce the highest voter turnout “in the century,” according to the New York Times. Analysts estimate a 10% increase and a turnout that is unprecedentedly diverse from four years ago, according to The Atlantic.

This change is seen in Decatur as well. Last year, Daniel organized a similar event, but with only one day for students to register and little advertisement beforehand, only about 20 people registered.

“This time around, we’ve broken 20 already in the first half hour, which is a really fast pace,” he said. “I’m really impressed and excited.”

Senior Clara Levin was one of the first students to register to vote.

“[The application] was fairly easy; it took less than five minutes,” Levin said. “I just had to write my address, my social security number, drivers license number if you have one, then check a few boxes and sign it. It doesn’t ask you anything political at all.”

Levin registered to vote with her family in mind and is using this opportunity to recognize and address the privilege in her life.

“When I vote, I will think of myself, but I will also think of the people I know that could use my vote,” she said. “Even if the vote isn’t going to directly affect you, it could affect the world around you.”

“The more young people registered, the more seriously politicians will have to take us and our opinions,” he said. “And as more people reach 17 and a half, [SGA] wants to make sure that students are being registered. I’ve talked to fellow junior SGA members and they are excited to keep up the tradition next year.”

UPDATE: According to Daniel, a total of 72 students from Decatur High School registered to vote by the end of lunch on Friday, Feb. 14.