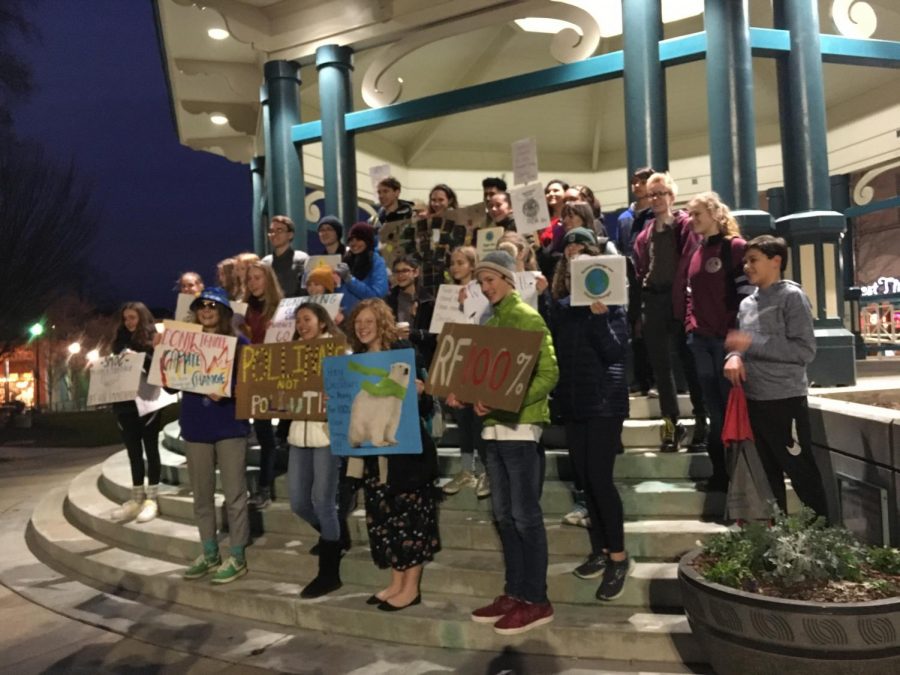 Students stood in front of the gazebo for the protest.

Students assembled at the gazebo starting at 6:00 p.m. with colorful posters featuring slogans like “Hey Decatur: I’m ready for 100% clean energy” and “RF 100%”.

When the students got to the Marriott, they separated into two groups at separate entrances to encourage people going to the Strategic Planning meeting to advocate for their cause.

Protest organizer and freshman Melissa Maudlin was inspired by other instances of climate change activism and awareness.

“Last year, I was inspired by Greta Thunberg and her Fridays for Future movement,[and]…the UN climate report which said basically that we have ten years left to make unprecedented change, and it made me realize that I had to act now,” Mauldin said.

Like Mauldin, sophomore and protest organizer Bailey Carr felt the need to protest because of the imminent threat she feels climate change poses.

“Climate change is one of the most defining issues of our generation, and if we don’t do anything about it we are literally going to face the end of the world,” Carr said.

The protest is part of a larger nationwide plan, according to Mauldin.

“This is part of a plan called Ready for One Hundred that Sierra Club is promoting and 150 cities across the country have committed [to] that represents about 30% of the population, so it’s possible. The first step is making the commitment.”

Maudlin’s group plans to hire consultants to help develop the plan and then send the plan to the “sustainability committee.”

For Mauldin, the main goal of the protest is influencing others to act.

“We are trying to encourage people to list 100%  clean and renewable energy for their top priorities for Decatur,” Mauldin said.