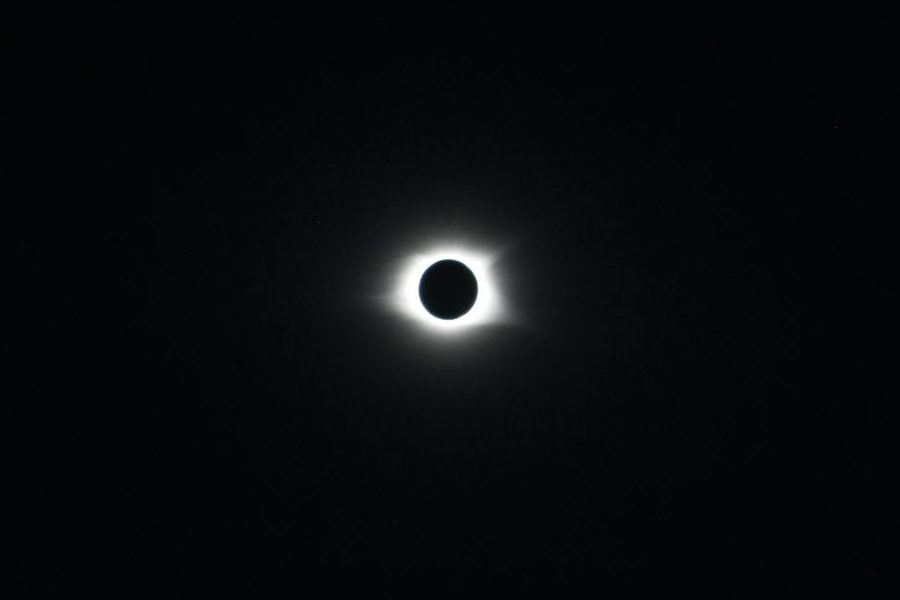 For the first time in nearly a century, the “Great American Eclipse” made its way across the United States. It spanned from coast to coast, covering the northernmost part of Oregon to South Carolina.

“It doesn’t [usually] happen that way,” professor of astronomy and astrophysics at Emory University Alissa Bans said. “All the time you’ll get solar eclipses that just clip the United States or occur in the middle of the ocean. It’s really nice that it’s going all the way from the West coast to the East coast.”

If you look closely, you can see the outline of the sun through the clouds at Black Rock Mountain State Park.Photo by Niki Gajjar

Students look at the sun through their eclipse glasses at Tugaloo State Park.Photo by Kheyal Roy-Meighoo

The shadows each acted as projections of the eclipse, forming crescent-shaped shadows.Photo by Niki Gajjar

“Solar eclipses are not rare, they happen at least once a year, even twice a year, somewhere on Earth,” Agnes Scott professor of astronomy and physics Amy Lovell explains.

“The sun appears to be in size about half a degree on the sky, so about the side of your pinky if you hold it up at arm’s length,” Lovell said. “Coincidentally, the moon is almost exactly half a degree as well.”

This coincidence is what causes solar eclipses. The path of totality is where the moon completely covers the sun, and viewers are able to take their glasses off to see it. For those not in the path of totality, only a partial eclipse is visible, and in order to see it viewers must wear specialized eclipse glasses. “[It’s] never a great idea to look at sun,” Bans said..

It is rare to have a solar eclipse in a populated area – it’s even more rare that a total solar eclipse has a continuous path of totality with nearly 93 minutes of ground time.

“It’s sort of rare because of the mechanics of the earth, moon, sun system,” Bans explains..

Enter a caption (optional). Select text to format it.

The last total eclipse that crossed the entire continental United States was 99 years ago. Lovell was excited to view the eclipse in her “own backyard.”

“It’s very exciting to have an eclipse right here,” Lovell said. “In 1999 I made the big expedition to see the eclipse in Europe…this is so much easier.”

Residents in Atlanta were treated to a 97% solar eclipse, while those in northeastern Georgia saw a total eclipse. Areas like Black Rock Mountain State Park and Brasstown Bald held “viewing parties” with solar telescopes, citizen scientists studying the eclipse, and different activities for visitors.

At Decatur, some students went on a field trip to Tugaloo State Park, and others stayed for a viewing on the football field.

Junior Syd Balcom was able to head to Tugaloo State Park to view the eclipse. “It’s literally insane,” Balcom said when the Moon covered the Sun. “It’s so weird to see the sun like this!”

Junior Syd Balcom traveled with the IB Physics department to view the eclipse at Tugaloo State Park.Photo by Kheyal Roy-Meighoo

Balcom was referring to the ring of light surrounding the Moon. At the point of totality, the Corona, or atmosphere of the Sun, will be visible to the naked eye.

“The Moon will completely cover the sun and we’ll see the Corona,” Lovell said. “The Corona is the outer atmosphere of the sun that we can only see during an eclipse…The Sun, like the Earth, has an atmosphere. The atmosphere has a lot of layers.  The layers are denser the closer you get to the Sun.  That’s where the really bright parts of the sun are.  When you block out the brightest part of the sun you start to see the upper levels of the atmosphere.”

The moon completely covered the sun, allowing us to view the Corona with the naked eye.Photo courtesy of Shai Smith

Cameras cannot be directly pointed at the sun because the lenses would be destroyed, similar to our eyes.  This shot was taken with a pair of eclipse glasses over the lens of the camera.Photo by Kheyal Roy-Meighoo

The corona of the Sun shines through the cloud cover at Black Rock Mountain State Park.Photo by Niki Gajjar