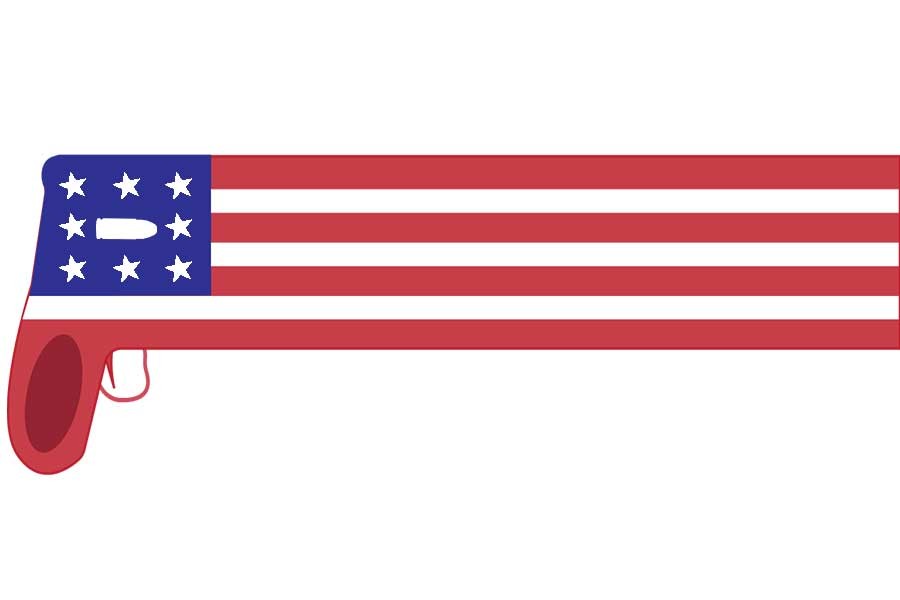 One day. 24 hours, 1,440 minutes, 86,400 seconds. For most Americans, one day is insignificant. Mondays turn into Tuesdays, the arrival of 5 o’clock seems to take forever and from sunrise to sunset, it’s an average day filled with mundane tasks.

According to the Brady Campaign to End Gun Violence, in that one day, 297 Americans will lose their lives to gun related incidents.

Death from gun violence in the United States is not unusual. Horrors of mass killings tore hearts as Americans learned of infamous gun incidences such as Columbine, Sandy Hook and San Bernardino.

These deaths can be attributed to the gun culture of America, lobbying and policies enacted by our national government, research shows.

The United States ranks first for the number of mass murders in the world.

The FBI defines a mass murder as an act of destruction that results in four or more deaths, with little to no time in between the murders.

According to a 14–year study launched in 2000 by the The University of Texas, there were 133 mass shootings in the United States.

In his speech on Jan. 5, President Barack Obama expressed his belief that our mindsets are to blame.

“Somehow we become numb to it and we start to feel that this is normal,” he said.

Other experts believe that America’s mass killings are committed because of how society views them and the stigma they place on the perpetrators.

Mary Muscari, a forensic nurse at Binghamton University in New York, studied revenge-driven mass killers. In an article with Discovery, she mentioned how younger serial killers seek attention through their actions.

“That’s why you see them wanting to have a bigger head count, a bigger body count, to try to outdo the last one or to do something that is going to cause more of a rise,” she said.

“The United States does not have a monopoly on crazy people, and it’s not the only country that has psychosis,” he said. “And yet we kill each other in these mass shootings at rates that are exponentially higher than anyone else. Well, what’s the difference? The difference is that these guys can stack up a bunch of ammunition in their houses, and that’s sort of par for the course.”

The Guardian reported in an article on Oct. 7 on the psychology of guns. They found people want guns for protection and recreation.

“It seems that [owning a gun] just creates more opportunity for violent responses to the issues we are facing in the world,” she said.

Junior Dillon Suna, who wants to pursue a career in the military, disagrees.

“I believe that most guns are used in self defense because they offer security,” Suna said. “[The] majority of gun owners own guns for safety.”

Suna’s stance on gun use is largely because of his involvement with JROTC, he says. He believes that guns should be used to protect the nation and for personal defense.

Leaders of the National Rifle Association (NRA) agree that guns are needed for protection.

The NRA is a political lobbying Political Action Committee (PAC) that supports Second Amendment rights and limited gun control. They gather campaign contributions and fund campaigns for or against certain candidates.

Many people want to believe that’s what guns are being used for – self defense.

For every time a gun is used in self defense, one is used 11 times for a completed or attempted suicide, seven times in a criminal assault or homicide and four times in an unintentional shooting death or injury, the Brady Campaign found.

Many opinions show how our country reacts toward violence caused by guns and guns in the hands of civilians.

The common occurrence of mass killings in America has caused many citizens to become vocal and strive for a safer community.

Enloe believes that the solution lies with the government instituting stricter policies.

“We need to balance responsible gun ownership with proper controls,” she said. “No one needs assault rifles and semi automatics. Every gun owner should welcome proper checks and balances to their right to bear arms for the protection of us all.”

Though he supports the Second Amendment, Suna doesn’t see a way for our society to become safer with current gun legislation.

“It’s just not possible,” Suna said, “because you always have people that want to do harm. If someone wants to kill someone, and they have availability to guns, the chances are higher.”

The Obama Administration believes that prayers and lip-service from congress are not taking our country anywhere.

The White House released a statement after Obama’s Executive Order speech, claiming “sympathy is not enough to stop gun violence.”

The statement went on to say, “Congress has repeatedly failed to take action, blocking commonsense reforms supported by the vast majority of the American people, including gun owners themselves.”

Hammer feels confident that the Second Amendment will triumph despite the adversity it is facing in the federal government today.

“America’s gun culture is growing and getting stronger in the face of an administration that subverts the constitution.”

The NRA possesses the capability of influencing congressional votes and bills. 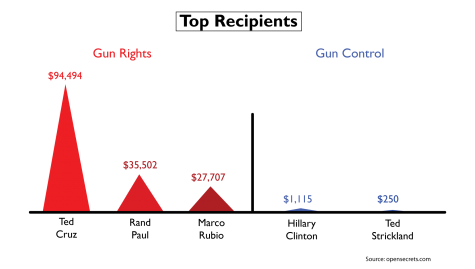 They use a rating system, based on congressmen’s voting histories on gun rights issues, to decide who they channel funds to when the time for re-election surfaces.

According to a study done by The Washington Post, 80 percent of the congressmen who were backed by the NRA won re-election.

In other words, representatives that were supported by the NRA’s funding won over their counterparts.

This is a direct example of how the NRA is influencing politics. Congressmen who were supported by the PAC vote in favor of their issues, creating more legislation in favor of gun rights.

Due to NRA lobbying, the Central for Disease Control (CDC) is not legally allowed to publish any reports on gun deaths or homicides to the public because of the fact that it could possibly support gun control.

The law states that “none of the funds made available for injury prevention and control at the CDC may be used to advocate or promote gun control.”

As a result of the NRA’s lobbying efforts, governmental research into gun mortality has decreased by 96 percent since the mid-1990s, according to a Huffington Post investigation.

“Scientific inquiry in this field has been systematically starved, and as a result almost no one does it,” emergency room physician and University of California professor Garen Wintemute said in an interview with the Huffington Post.

Wintemute told the Huffington Post that he estimated there were fewer than a dozen researchers in the country whose primary commitment was to firearm violence prevention.

Because of this, the public is denied vital information in regards to guns—information that can be interpreted to vote against gun bills.

They also focus their efforts on supporting parties and disenfranchising parties that go against their ideals.

Republicans are the favorable party to the NRA due to their conservative stances on gun rights. Democrats, on the other hand, are against the arguments the NRA presents, calling for more gun control.

In a Mother Jones article on Apr. 16, Lee Drutman researcher of the role of gun money in politics, said that the NRA has detrimental effects over American’s representation in federal government.

“[Members of Congress] know what the NRA is capable of doing and the kinds of ads they’re capable of running,” Drutman said, “and especially if you’re someone facing a close election, you don’t want hundreds of thousands and potentially millions of dollars in advertising to go against you.”

Marion Hammer, executive director of the NRA and a Druid Hills High School alumna, believes that political lobbying is all about communication.

She is currently lobbying in Florida to allow students to openly carry weapons in a bill that would restore immunity.

According to her, the NRA sees lobbying for the Second Amendment as a way to enlighten citizens about the constitution, not as bullying congressmen into submission.

“People see it as persuasion, but it’s not,” she said. “It’s about education.”

Hammer feels that once congressmen know the facts, they’d be more likely to vote in favor of a bill.

“Once legislatures are educated they’ll support you,” she said. “People see it as persuasion, which it’s not.”

Suna agrees with the NRA’s arguments but doesn’t support their methods.

“I look at the NRA and how they support gun rights,” Suna said, “but I also look at how they’re a corporation. They try to get what they want by using money.”

As a result of Suna’s conflicting views, he finds himself in a difficult position.

“I plan to go into the military,” he said. “I’ll be using guns in my job, so it’s hard for me not to entirely agree with the NRA.”

The NRA isn’t the only PAC that spends money on political influence.

Data from the Senate Office of Public Records shows the top five gun control groups spending $5.8 million from 2013-2015 on lobbying.

Their current focus is making the distinction between firearm violence and mental health, according to Latt Everett, communications representative.

“Our major project is exploring linkage between guns and mental health,” he said. “Mental illness is not to blame for gun violence. The focus should be on the history of violence, no matter the cause.”

This advocacy group is also working on legislation and Second Amendment insur activism.

“There is no right to take guns, or kill government officials if you don’t like their opinions,” Everett said. “The founders of the government understood, but today it gets lost.”

The coalition, Everett said, has a goal of making our communities and country safe.

“We want to create a society where dangerous people can’t get guns,” he said. “Many mass shooters have red flags, yet in the majority of cases, mass shooters are able to pass a background check. That is not civilized society. That is anarchy.”

Sophomore Mary-Iris Allison advocates for gun control and is a strong supporter of work that the CSGV does. She feels it’s her duty to educate teenagers on the issue.

“As a liberal millennial in a predominately red state, I am passionate about and involved in most of the issues in politics today to ensure that there is a voice heard,” Allison said. “Gun control affects the life of every American, as the misuse of a gun can end it.”

The coalition, Everett said, is horrified by the work the NRA is doing.

“The NRA is approaching white supremacy,” Everett said. “They are so tied into the gun industry, and get millions of dollars from corporations.

Everett believes that the NRA’s goal is to “increase gun sales no matter how many Americans are dying.”

“We cannot be a civilized society with groups such as the NRA controlling this issue,” he said.

Allison feels that the NRA is a problematic group that works against the greater need of the American people.

“The National Rifle Association is a disgustingly influential opponent of the fight for gun control,” Allison said. “NRA lobbyists challenge and prevent the response to an American desire for a safer society with less deadly weapons.”

Watch this segment from CBS Sunday Morning to learn “How guns became a part of American culture.”