When faith and sports collide 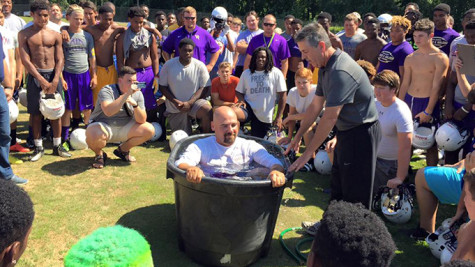 They bow their heads in prayer, waiting for their turn to become reborn. A mass baptism. But this isn’t taking place in any kind of church.

According to Fox News, approximately 75 parents, athletes and coaches participated in a mass baptism on the Villa Rica High School football field on Aug. 13, 2015.

Originally the plan was for the defensive coordinator, Andy Szatkowski, to be baptized, but one by one players from the team asked to be baptized as well.

Szatkowski chose to be baptized on the field because of his love and passion for football.

When asked to comment about his decision, Szatkowski said that he does not “want to draw anymore attention to a private matter.”

Elizabeth Cavell, the staff attorney from the Freedom from Religion Foundation (FFRF), was not pleased when she heard about the baptisms.

“It is illegal for coaches to participate in religious activities with students, including prayer and baptisms,” Cavell said.

This was not the FFRF’s first run in with Georgia school districts. They also sued the Emanuel County School District for praying with students.

According to the Pew Research Center, 71 percent of the U.S. population recognizes themselves as Christians. Considering that, coaches praying with players has become an issue for various schools across the country.

According to a 2014 poll from Gallup, 61 percent of Americans, ranging from school officials to parents, pray with students.

Cavell also said that this seems to be a lingering issue for some schools because “teachers and school officials are not fully aware of the boundaries.”

In an interview with 11Alive, Kevin Williams, pastor of the church behind the baptisms, described the event with a positive outlook.

“We tried to have it at a calculated time when it wouldn’t be against any policies that we knew of,” Williams said. “[The baptism is] just kind of what happened. There was never any intent to cause a problem.”

Williams also expressed his disagreement with the state law.

“I don’t agree with that at all,” Williams said. “I go by the Bible; that’s what I follow. That’s my guidelines. I want to respect the law of the land, I do — but I have a higher power that I answer to.”

Williams told 11alive that a potential issue with a coach’s involvement in the baptism was “not really discussed.”

This issue does not only apply to Villa Rica but to DeKalb county schools as well.

According to sophomore Myles Johnson, praying at sporting events is no rare occurrence. 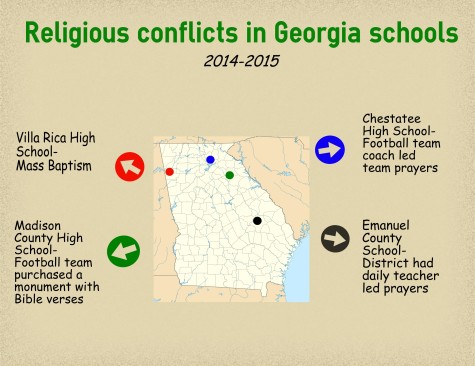 Johnson has not witnessed the praying at Decatur, but he has seen it happen at other schools in the county.

“I haven’t played for a school where the coach prayed with their players,” Johnson said. “But I have played against some school teams that have asked us to pray with them.”

Those schools include public and private
schools alike.

Johnson also agrees that the lines of the law may be blurred and the public isn’t informed.

“I actually didn’t know that coaches were not allowed to pray with their students because they
do it so often,” Johnson said. “I just thought some were choosing not to.”

“Since there is such a widespread thought that coaches can pray with players, I hate to seem like the bad guy here, but the policy might have to be stricter,” Phillips said.

The consequence of a school district getting reported can put a coach’s job at risk, as well as bring negative media attention to a school.

Although the aftermath may be harsh, Phillips agrees with the ramifications of being “turned in.”

“If coaches or school officials insist on praying with students in violation of the law,” he said, “they are putting their district at risk of being sued. They also risk being disciplined or even fired.”

Phillips said the law is here to “protect the wellbeing of our school districts in the U.S.”

Though Phillips believes in abiding by the law, he also thinks that, that students and coaches should be able to practice their own religion.

“Personally, I don’t think that the law should prohibit coaches from praying with players,” Phillips said. “I believe everyone is entitled to their own belief in religion, and should be able to practice it regardless of who or where they are.”