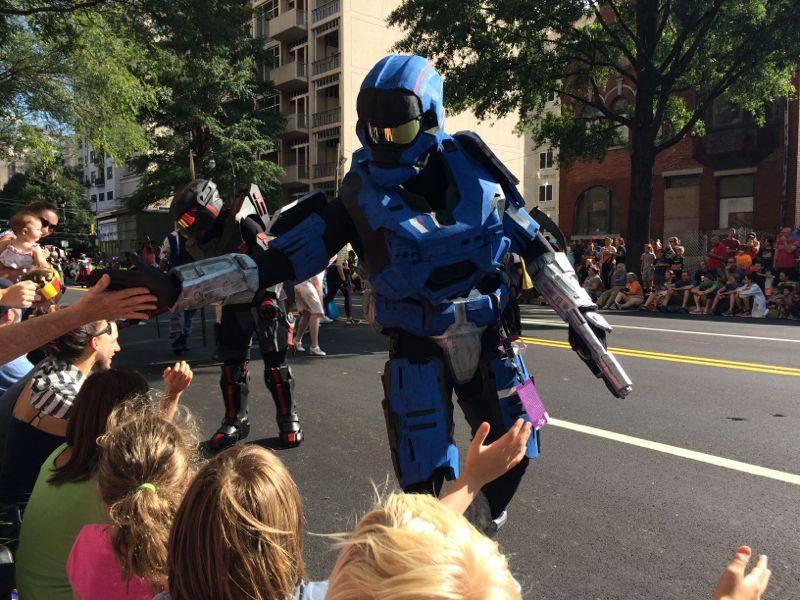 Even the scariest of costumes elicits high fives and cheers from the crowd.

The Dragon Con Parade took a walk down Peachtree Road this past Saturday and fans of all different genres were there to cheer it on. These fans came from all over the USA and the air thrummed with their excitement.

Kathy Skirmont, a member of the Captain America Dancing Girls Costume Group, has been walking the parade for 12 years and finds the parade to be wonderful.

“We get such a great response from the crowds that come out,” said Skirmont. “It’s very rewarding to do that [walk in a parade] in an environment that is non-competitive.”

Jason Buffa, a spectator, went to his first Dragon Con parade this year. He also thinks the parade is wonderful.

“People dress up as their favorite characters and it’s just fun,” Buffa said.

Dragon Con and its parade has made Atlanta a wildly popular place for geeks. When Lori and Sydney Blackburn first moved to Atlanta, they asked friends for what things to do.

“We moved here three years ago and [ the Dragon Con Parade] was one of the first things people were like, ‘You’ve got to go. It’s ridiculous,’” Lori said. “When we got there, Sydney was like ‘Mom, these are our people.’”

This reputation would not be able to be upheld without the people who walk in the parade.

“People who commit entirely to a character are amazing,” said Lori Blackburn.

The parade walkers also find the parade one of a kind.

“It’s a very welcoming environment, which I appreciated for my first parade. Usually cons have costume contests, which can seem very daunting.” said Skirmont.

Dragon Con is one of the most well known conventions in Georgia, partly because of the parade. This year Dragon Con, the largest parade in Atlanta, was broadcasted on the CW for the first time. It featured sources from Six Flags and Dragon Con.