On Oct. 11, five new sculptures were added to downtown Decatur.

The new sculptures are going to be installed for two years, so the City of Decatur can assess public reaction to the art before the city decides if they want to purchase them permanently.

According to Angie Macon, executive director of the Decatur Arts Alliance, public reaction to that art has been extremely positive so far, and even the negative responses are welcomed.

“I think any art that evokes an emotion is good art, so I’ve had people say they love the sculptures, and some that don’t like it much,” Macon said. “My response is always, ‘great! It’s there for two years!’”

For Macon, this public art has been able to “create a sense of place” around Decatur and allow the art to be shared universally.

“Our goal is to make art accessible to everybody, whether you’re in preschool, older, or a visitor,” Macon said. “To me, art enables people to speak in a different language that everybody can interpret. ”

Matthew Phillips, the artist of “Mortification,” near the upper MARTA plaza, says that public art is important because it “engages persons who might never step foot in a museum or gallery setting.”
Here’s what you need to know about each of these sculptures:

“Ver Sacrum” was created using a form of digital fabrication that the artist team was researching.

According to the School of the Art Institute of Chicago, digital fabrication is a process that takes software sketches and turns them into 3-D, material forms.

The unique organic forms of the installation create a strong contrast to the surrounding structures of the MARTA station.

“The three conic structures create a contrast to the infrastructural architecture of the square in Decatur,” Daniel Baerlecken, an artist on Ver Sacrum’s team said. “Light meets solid, as ornament engages with the industrial structure, while pattern radiates into the space surrounding it.”

In “AMUK,” Ira Hill invites the viewers to “leave their mark” on the surface, and freely interact with the art, whether it be just sitting on it, or writing on it.

“I create works where the public can alter the surface, and in that way, we collaborate as the sculpture evolves in color and space and time,” Hill said. “It becomes something more that just an object to behold. It comes alive.”

Hill says he makes public art for this purpose, to invite people to make their mark and to “let people in the future know that we have been here, and that our lives and our energy mean something.”

In “Mortification,” Matthew Phillips uses the idea behind the “self pruning” of a tree and his past experiences in seeing people who were themselves “pruning” parts of their lives.

Self-pruning is best described as what trees do when a limb becomes unproductive. When this happens, the unproductive limb falls, so as not to hinder the productivity of other limbs. The tree continues to do this until it has lost all of its limbs.

Phillips saw a similar thing happen to a friend of his who was passing away of a brain tumor, that acted as the inspiration for his art.

“He would invite me over occasionally to help clean out and tidy up his house,” Phillips said. “I think he was trying to take care of things for his wife before he passed away. I saw him pruning the things from his life that might be a burden to his wife after his death.”

This concept served to inspire “Mortification.”

Scott Garrard found his inspiration for “Teapot 50” through his previous work with pottery and ceramics.

“I was making so many pots on a potter’s wheel that my hands often bled,” Garrard said.

Garrard’s commitment to his art allowed him to grow as an artist and further explore many topics and ideas he had from when he was younger.

“I am enjoying the circle of life by creating steel sculptures for forms and ideas I developed in my early twenties,” Garrard said. “My hope is that the work challenges the viewer to question the functionality of historical ceramic forms with new conceptual ideas and materials.”

This is Something We Had to Go Through

“This is Something We Had to Go Through” is another interactive installation, in which the artist encourages the audience to walk beneath the two openings in the sculpture.

The openings are slightly narrow, and create vague human-like figures. Davis created the paths for viewers to walk through so they could “experience the feeling of going through something difficult.”

For Davis, the sculpture holds deep meaning that acts as a sort of “mile marker” in his own life. The idea of this comes from things he’s gone through, good, bad, sad, or happy.

“This piece is based off the simple idea of two people going through things together, things that might not always be the easiest, but make and direct your path,” Davis said. 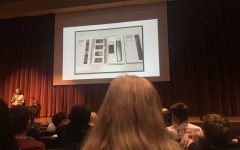