Three is a trend

Last year in the old Yogurt Tap space, Poké Perfect opened up as the first poké restaurant in Decatur. A few months later, a poké, salad and juice bar opened around the block with the name of Juicy Drop.

After various complications, Poké Perfect was replaced on Jan. 16 when Poké Bar, a fast-growing and eager franchise, opened its doors.

“The time was just right for us,” general manager Julius Shin said. “We are trying to make our name nationwide, and we want everybody to know that we are the original poké concept restaurant in the United States. In general, we just want our customers to come here and eat and leave here happy.”

As a growing franchise, Shin now manages eight locations in Georgia after joining the Poké Bar team last year. Poké Bar began spreading around the country after its success in California.

After a visit to Hawaii, the owners combined their restaurant experience and interest in the food to open their first Poké Bar in Los Angeles in 2015. Their basic take on the dish has captivated customers ever since.

“We are trying to keep it very simple,” Shin said. “We like to just focus on the poké bowl. If we add more things to the menu, we will lose the fast, casual and healthy elements that make this place special.”

“[Poké] is already known in this area, and there are a lot of people who try to eat healthy,” Shin said. “Our concept fits in here, and places like us tend to be ‘hip spots’ in Georgia, so we already know that customers will like it.”

One customer, Will Whatley, was pleasantly surprised by his experience at Poké Bar.

“[The employees] greeted me when I walked in, and I didn’t have to get their attention like I did when I first went to Poké Perfect,” he said. “They had recommendations so you can tell that they know what they are talking about.”

After ordering, Whatley sat down with his small, $10 spicy tuna and shrimp bowl and San Pellegrino and dug in.

“It was scrumptious and amazing,” Whatley said. “If you are a vegetarian, I’d definitely say that Juicy Drop is better because they have more vegetable options. But if you like meat, you should definitely pull up because they have a lot of meat options and all of the flavors are so good.”

So far, business at Poké Bar has been slow, but Whatley hopes to spread the word on the new restaurant.

“I hope that teenagers go, and it makes me sad that they aren’t getting a lot of business right now,” Whatley said. “It is super teenage friendly because of the colors, vibe, it’s super affordable and they accept cash. So, I’m definitely going to push people to go there because it’s amazing.”

Shin is certain that business will increase by sticking to their concept.

“We are specialized in the poké bowl,” Shin said. “Some places advertise as poké, and when you go in they have really different menus. They may have grilled chicken or sushi burritos on their menus. We don’t do that. We just put poké in front of the restaurant and we are healthy because we don’t use salt, we don’t use sugar and we don’t use oils. We just use a lot of vegetables and that is a plus for us in this kind of area.”

Gallery|8 Photos
“Everything was orange which immediately caught my eye," Whatley said. "I definitely like the color choice and it makes a happy vibe in there.”

All photos by Isis Amusa. 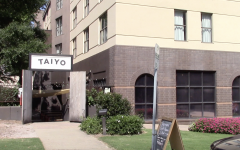 Three is a trend