Jessica Dove, Biruk’s seventh grade teacher, sends encouragement through his memory book, which he received at his going away party at Hayfield Secondary School in Alexandria, Va.

Jessica Dove, Biruk’s seventh grade teacher, sends encouragement through his memory book, which he received at his going away party at Hayfield Secondary School in Alexandria, Va.

From Addis Ababa to Decatur

He was nine years old when his mother died and thirteen when his father died, but no one would tell him how. He was too young.

“After my parents’ death, I   didn’t even know I am going to live anymore because I was really young. My parents are gone, and I saw my sister crying a lot,” sophomore Biruk Kyzer said.

After the loss of his parents, Biruk lived with his older sister Meseret Demisse in Ethiopia’s capital, Addis Ababa.

“Ethiopia sounds like a bad country,” he said. “Like if you ask most people that are other citizens they will tell you how poor the country is, but if you go there it’s not like what people think.”

He lived with Demisse until the age of thirteen when his adoption was finalized to go to America. Having a husband and child in Ethiopia, his sister could not join him.

Biruk moved to Lorton, Va. with his aunt and uncle one year after his father’s death. His aunt traveled to Ethiopia to pick him up and they flew back together.

“Even though the reason I came to America was painful, when I got here I found that my new life was really great, especially at school,” Biruk said.

In America, Biruk began learning English and adjusting to his new surroundings. He learned that an Ethiopian misconception about America having money everywhere is not true. Today he looks back and laughs.

“When I was in Ethiopia, I was thinking that [in] America [you] could find money on the ground, like it’s a really cool thing, but no, that’s not true,” Biruk said.

The lack of money on the ground didn’t hinder Biruk from falling in love with his new home.

“Alexandria, Va. is great. When I grow up, if I can afford it, I want to move there or I want to go to college there,” he said.

After about two months in Virginia, Biruk attended Hayfield Secondary School (HSS) in Alexandria, Va. Hayfield catered well to students learning English as a second language through the large English Speakers of Other Languages program.

The school allowed Biruk to expand his English while creating bonds between friends and teachers.

“Everybody knew him. He was always willing to help out,” Jessica Dove, Biruk’s seventh grade ESOL science teacher at HSS, said.

Unfortunately, Biruk did not stay as long as he hoped. He learned from his aunt and uncle that he could no longer live with them in Virginia.

“When they told me I may have to go back to Ethiopia, I was surprised because I came here to live but some part I understand because if I am not going out of that house my uncle and his wife will divorce,” Biruk said.”

Though Biruk did not attend Hayfield for an entire school year, students, teachers and even the principal grew to love him.

“He was such a good role model for other students,” Dove said. “He was just a good helper, like the kind of kid you want to have in your class, and I remember all of us were so sad that he was leaving, so we decided to throw him a little going away party.”

Meanwhile back in Ethiopia, Biruk’s cousin worked in an orphanage alongside Dedra Hawkins, who already knew Mark Kyzer, an unmarried Decatur resident that adopted an Ethiopian boy in 2009. Biruk’s cousin told Hawkins about Biruk.

Around that time, Mark contacted Hawkins and she told him about Biruk. Hawkins shared Biruk’s aunt and uncle’s information with Mark, who planned to correspond with the family.

“I completed the circle,” Mark said, referring to the links between himself and Biruk.

Meseret didn’t know about Biruk for very long before he met him.

“I was in Ethiopia [visiting] when I heard about him over the phone. We flew to Virginia as soon as I got back,” Meseret said.

He was anticipating “what he is going to look like and how he [is] going to act.”

“I remember when I met him,” Mark said. “He was very polite, very small. He looked like he was about six years old. He was so small and he was very shy, so he didn’t talk to me much that day.”

All the while, Mark contemplated the idea of adopting Biruk. He thought back and forth, considering if the timing was right for himself and Meseret.

“I wasn’t 100 percent sure, but I think just to keep him from getting his hopes up Solomon, his uncle, didn’t tell him exactly why Meseret and I were making the trip up there to see him,” Mark said.

Knowing what to expect, Mark prepared to go through the adoption process once again. Two months later Biruk joined his new family in Georgia.

“First I was scared,” Biruk said. “I don’t want to leave my school friends, but you know I have to.”

Slowly, he began to warm up to his new home and adjust to his new family.

“It was a little while before he called me dad and then he asked permission – ‘is it okay for me to call you dad?” Mark said.

Though it took a while for Biruk and Mark to relate, Meseret and Biruk quickly connected because both speak Amharic, an Ethiopian language.

“I was happy because now I have someone who understands my culture and language, also the importance of it,” Meseret said. “You don’t need to be from the same blood line in order to be real brothers.”

As excitement grew in both Mark and Biruk, anxiety trailed not too far behind.

“It’s sort of a scary thing because you’re bringing another member into the household who’s already a teenager, who already has a personality that’s formed, who already has habits, either good or bad, who has experiences, some good, some really bad,” Mark said. “You’re talking about bringing them into your home and making them a part of your family, not really knowing how well it’s going to work out and you just have to rely on your gut, and what it’s telling you is right.”

When Mark and Meseret finally brought Biruk into their home, they discovered that Mark’s gut had been right.

Meseret remembers Biruk being shy when they first met. He notices the change in Biruk from shy, to being “goofy in an annoying little brother way.”

“I finally have a brother like I always wanted and I know that I will be a part of this family forever,” Biruk said.

Mark allowed Biruk to smoothly transition from HSS to Renfroe Middle School as an eighth grader. Though Biruk was originally uneasy, he grew to love Decatur.

“I love that I’ve made a lot of good friends that I can hang out with,” Biruk said.

“He took risks,” Plishka said. “He would stand up in front of people [to share speeches] and it didn’t matter. He was confident. He was willing to play with the English language and then learn to control it.”

Biruk’s adoption became official on Nov. 16, 2012 during his eighth grade school year. Plishka “felt like he was more grounded” in his academics as a result.

Despite his love for his new home and new family, Biruk sometimes finds himself missing the atmosphere of Ethiopia.

He misses the sense of community, “getting together and eating and drinking, partying,” in Ethiopia.

Mark agrees that Biruk misses the presence of community in Ethiopia.

“People don’t go home at the end of the day to their houses,” Mark said. “They don’t spend the rest of their day there like most people in the United States. They might go home after work, but then they’re out in the market, they’re meeting their friends, they’re going to friend’s houses. That’s one of the things [Biruk and Meseret] miss most, that strong sense of community.”

Though Biruk misses that feeling, the bonds he has between his adoptive father and

brother are just as strong.

Today, he looks back at a painting that Mark bought him in “Little Ethiopia”, now hanging on his wall, and is reminded of when all the pieces came together.

He knows he wants to stay in America for the rest of his life, but he hopes to visit Ethiopia in the future, but only for a few weeks at a time.

He also hopes to one day help his sister and nephew join him in the United States.

Decatur is his new home, and he is grateful for the life he’s been able to make.

“My dad says, ‘There is only one constant in life, and that is change.’ My life is proof that this is true,” Biruk said. 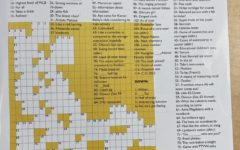